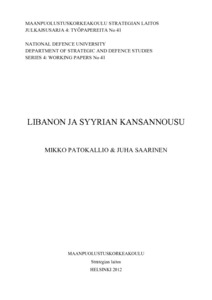 Lebanon has been largely stable during the tumultuous Arab Spring, but the country remains vulnerable to internal and regional instability. In addition to Lebanon's volatile internal conflicts, Lebanon is particularly exposed to increased regional tensions. While renewed tension in South Lebanon is often considered the most likely cause for instability in Lebanon, the deepening conflict in Syria now poses the greatest threat to Lebanon. This publication examines how the uprising in Syria affects both the internal stability of Lebanon and the South Lebanon conflict, arguing that the uprising in Syria greatly complicates Lebanon's internal power balance, elevating internal tensions, while also changing the context within which the South Lebanon conflict takes place.