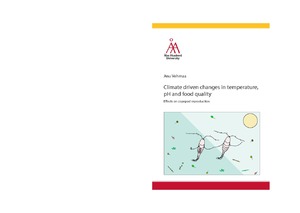 Increased emissions of greenhouse gases into the atmosphere are causing an anthropogenic climate
change. The resulting global warming challenges the ability of organisms to adapt to the new
temperature conditions. However, warming is not the only major threat. In marine environments,
dissolution of carbon dioxide from the atmosphere causes a decrease in surface water pH, the so
called ocean acidification. The temperature and acidification effects can interact, and create even
larger problems for the marine flora and fauna than either of the effects would cause alone.
I have used Baltic calanoid copepods (crustacean zooplankton) as my research object and studied
their growth and stress responses using climate predictions projected for the next century. I have
studied both direct temperature and pH effects on copepods, and indirect effects via their food: the
changing phytoplankton spring bloom composition and toxic cyanobacterium. The main aims of
my thesis were: 1) to find out how warming and acidification combined with a toxic cyanobacterium
affect copepod reproductive success (egg production, egg viability, egg hatching success, offspring
development) and oxidative balance (antioxidant capacity, oxidative damage), and 2) to reveal the
possible food quality effects of spring phytoplankton bloom composition dominated by diatoms
or dinoflagellates on reproducing copepods (egg production, egg hatching, RNA:DNA ratio). The
two copepod genera used, Acartia sp. and Eurytemora affinis are the dominating mesozooplankton
taxa (0.2 – 2 mm) in my study area the Gulf of Finland.
The 20°C temperature seems to be within the tolerance limits of Acartia spp., because copepods
can adapt to the temperature phenotypically by adjusting their body size. Copepods are also
able to tolerate a pH decrease of 0.4 from present values, but the combination of warm water
and decreased pH causes problems for them. In my studies, the copepod oxidative balance was
negatively influenced by the interaction of these two environmental factors, and egg and nauplii
production were lower at 20°C and lower pH, than at 20°C and ambient pH. However, presence of
toxic cyanobacterium Nodularia spumigena improved the copepod oxidative balance and helped
to resist the environmental stress, in question. In addition, adaptive maternal effects seem to be an
important adaptation mechanism in a changing environment, but it depends on the condition of
the female copepod and her diet how much she can invest in her offspring.
I did not find systematic food quality difference between diatoms and dinoflagellates. There are
both good and bad diatom and dinoflagellate species. Instead, the dominating species in the
phytoplankton bloom composition has a central role in determining the food quality, although
copepods aim at obtaining as a balanced diet as possible by foraging on several species. If the
dominating species is of poor quality it can cause stress when ingested, or lead to non-optimal
foraging if rejected.
My thesis demonstrates that climate change induced water temperature and pH changes can cause
problems to Baltic Sea copepod communities. However, their resilience depends substantially on
their diet, and therefore the response of phytoplankton to the environmental changes. As copepods
are an important link in pelagic food webs, their future success can have far reaching consequences,
for example on fish stocks.