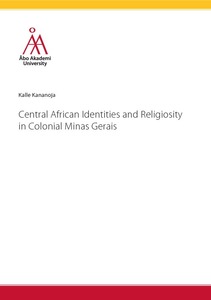 This study deals with the import of West Central African slaves and their religious practices to Minas Gerais in the eighteenth century. The captaincy of Minas Gerais in the interior of Brazil developed into the world’s largest gold producing region in the beginning of the eighteenth century. The large-scale mining of gold, and later diamonds, was only possible through massive imports of slaves from Africa to Brazil.
The first part of this study discusses the Atlantic slave trade in the southern Atlantic world. The discovery of gold in Minas Gerais led to an increasing demand for slaves in Brazil, which was largely met by supplies from Angola. The study analyzes the formation of Central Africans’ identities both in their homelands and in Brazil. Slave identities or “nations” have often been seen as creations of the slave owners. By interpreting major Central African “nations” such as Angola, Congo, and Benguela as regional identities that were tied to the slaves’ origins in Africa, this study offers a new interpretation of what these identities meant for Central Africans in Minas Gerais.
The second part of this study concentrates on the religious universe of Central Africans. Processes of cultural creolization affected West Central African societies after the Portuguese landed in the kingdom of Kongo in the late fifteenth century and led to the development of an Atlantic Creole culture. The spread of Catholicism in West Central Africa affected religious life especially in the kingdom of Kongo, in the city of Luanda, and in the Portuguese colony of Angola.
Central African religious specialists were often denounced to the authorities in Angola for organizing healing and divination rituals. Diagnosis in these rituals was often made through spirit possession. Central Africans took these healing and divining methods to Minas Gerais, where numerous African religious specialists enjoyed great prominence. In the Brazilian mining region, it was commonplace that African healers served not only the African slave population, but also free whites. In the eighteenth century, Central African popular healers made a significant contribution to the therapeutic arts practiced in Minas Gerais and elsewhere in Brazil.