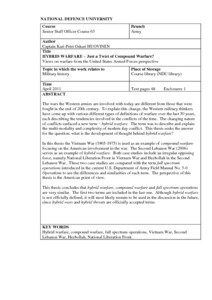 The wars the Western armies are involved with today are different from those that were fought in the end of 20th century. To explain this change, the Western military thinkers have come up with various different types of definitions of warfare over the last 30 years, each describing the tendencies involved in the conflicts of the time. The changing nature of conflicts surfaced a new term – hybrid warfare. The term was to describe and explain the multi-modality and complexity of modern day conflict. This thesis seeks the answer for the question: what is the development of thought behind hybrid warfare?
In this thesis the Vietnam War (1965-1975) is used as an example of compound warfare focusing on the American involvement in the war. The Second Lebanon War (2006) serves as an example of hybrid warfare. Both case studies include an irregular opposing force, namely National Liberation Front in Vietnam War and Hezbollah in the Second Lebanon War. These two case studies are compared with the term full spectrum operations introduced in the current U.S. Department of Army Field Manual No. 3-0 Operations to see the differences and similarities of each term. The perspective of this thesis is the American point of view.
This thesis concludes that hybrid warfare, compound warfare and full spectrum operations are very similar. The first two terms are included in the last one. Although hybrid warfare is not officially defined, it will most likely remain to be used in the discussion in the future, since hybrid wars and hybrid threats are officially accepted terms.