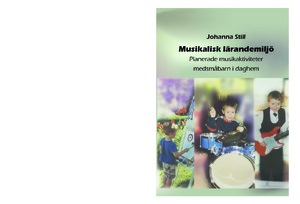 A musically stimulating nvironment is of great significance when considering the opportunities for development and learning that are offered to children in day nurseries. Moreover, the quality of musical activities also has great significance for the musical development of growing children. Young children are always striving to create meaning and understanding; they influence and are influenced by the context in which they are situated.
The purpose of this study is to investigate the planned music activities in the musical learning environment of seven toddler’s groups in day nurseries, based on four different aspects: the texts of children’s songs, the melodies of children’s songs, the basic elements of music and the use of instrumentation. The data has been gathered by video observation of the planned music activities. The age of the children studied ranged from 11 months to 3 years and 11 months, and on average there were 13 children in each group. The study involved a total of just over 90 children and nine educators. The methodological approaches are hermeneutic as well as videographic, and they are applied to the analysis as required. The approaches are well suited to an understanding of the planned music activities where the individual’s communications and actions are studied.
The results of the study show that educators impart a cultural heritage to the children in the form of old traditional songs, but they also act as intermediaries for newer children's songs. They focus on actively on the text content of the children’s songs in their interaction with the children, but do not address the meaning of the text. Furthermore, while the educators use music sessions for the children to develop, among other things, an understanding of language and social skills, they do not use the sessions to develop the children’s musical skills. The educators could, to a much greater extent than they now do, direct the children's attention to the basic elements of music, and conduct meta-cognitive dialogues with the children. They use a large repertoire of children's songs, which are, however, often too demanding for the children’s voices to cope with. In addition, the educators do not plan, in any significant way, activities for the toddlers in order to help them develop the accuracy of their vocal tones. With regard to the use of instruments, the educators focus, in their interaction with the children, is placed on both the usage of the instruments and knowledge about the instruments. Regarding the use of instruments the study shows that the children’s musical expression takes place in an environment that includes both melody and rhythm instruments. It is clear that children are actively interested in the constructed instrument environment, because for long periods of time they independently play and experiment with instruments.