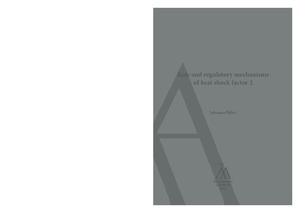 Protein homeostasis is essential for cells to prosper and survive. Various forms of stress, such as elevated temperatures, oxidative stress, heavy metals or bacterial infections cause protein damage, which might lead to improper folding and formation of toxic protein aggregates. Protein aggregation is associated with serious pathological conditions such as Alzheimer’s and Huntington’s disease. The heat shock response is a defense mechanism that protects the cell against protein-damaging stress. Its ancient origin and high conservation among eukaryotes suggest that the response is crucial for survival. The main regulator of the heat shock response is the transcription factor heat shock factor 1 (HSF1), which induces transcription of genes encoding protective molecular chaperones. In vertebrates, a family of four HSFs exists (HSF1-4), with versatile functions not only in coping with acute stress, but also in development, longevity and cancer. Thus, knowledge of the HSFs will aid in our understanding on how cells survive suboptimal circumstances, but will also provide insights into normal physiological processes as well as diseaseassociated conditions. In this study, the function and regulation of HSF2 have been investigated. Earlier gene inactivation experiments in mice have revealed roles for HSF2 in development, particularly in corticogenesis and spermatogenesis. Here, we demonstrate that HSF2 holds a role also in the heat shock response and influences stress-induced expression of heat shock proteins. Intriguingly, DNA-binding activity of HSF2 upon stress was dependent on the presence of intact HSF1, suggesting functional interplay between HSF1 and HSF2. The underlying mechanism for this phenomenon could be configuration of heterotrimers between the two factors, a possibility that was experimentally verified. By changing the levels of HSF2, the expression of HSF1-HSF2 heterotrimer target genes was altered, implementing HSF2 as a modulator of HSF-mediated transcription. The results further indicate that HSF2 activity is dependent on its concentration, which led us to ask the question of how accurate HSF2 levels are achieved. Using mouse spermatogenesis as a model system, HSF2 was found to be under direct control of miR-18, a miRNA belonging to the miR-17~92 cluster/Oncomir-1 and whose physiological function had remained unclear. Investigations on spermatogenesis are severely hampered by the lack of cell systems that would mimic the complex differentiation processes that constitute male germ cell development. Therefore, to verify that HSF2 is regulated by miR-18 in spermatogenesis, a novel method named T-GIST (Transfection of Germ cells in Intact Seminiferous Tubules) was developed. Employing this method, the functional consequences of miR-18-mediated regulation in vivo were demonstrated; inhibition of miR-
18 led to increased expression of HSF2 and altered the expression of HSF2 target genes Ssty2 and Speer4a. Consequently, the results link miR-18 to HSF2-mediated processes such as germ cell maturation and quality control and provide miR-18 with a physiological role in gene expression during spermatogenesis.Taken together, this study presents compelling evidence that HSF2 is a transcriptional regulator in the heat shock response and establishes the concept of physical interplay between HSF2 and HSF1 and functional consequences thereof. This is also the first study describing miRNA-mediated regulation of an HSF.