The effectiveness of short-term literacy skills intervention on children at risk of reading and writing difficulties in Tanzania : a study of grade one children with dynamic assessment approach 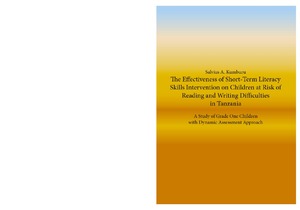 The aim of the study was to create and evaluate an intervention programme for Tanzanian children from a low-income area who are at risk of reading and writing difficulties. The learning difficulties, including reading and writing difficulties, are likely to be behind many of the common school problems in Tanzania, but they are not well understood, and research is needed.
The design of the study included an identification and intervention phase with follow-up. A group based dynamic assessment approach was used in identifying children at risk of difficulties in reading and writing. The same approach was used in the intervention. The study was a randomized experiment with one experimental and two control groups. For the experimental and the control groups, a total of 96 (46 girls and 50 boys) children from grade one were screened out of 301 children from two schools in a low income urban area of Dar-es-Salaam. One third of the children, the experimental group, participated in an intensive training programme in literacy skills for five weeks, six hours per week, aimed at promoting reading and writing ability, while the children in the control groups had a mathematics and art programme. Follow-up was performed five months after the intervention.
The intervention programme and the tests were based on the Zambian BASAT (Basic Skill Assessment Tool, Ketonen & Mulenga, 2003), but the content was drawn from the Kiswahili school curriculum in Tanzania. The main components of the training and testing programme were the same, only differing in content.
The training process was different from traditional training in Tanzanian schools in that principles of teaching and training in dynamic assessment were followed.
Feedback was the cornerstone of the training and the focus was on supporting the children in exploring knowledge and strategies in performing the tasks.
The experimental group improved significantly more (p = .000) than the control groups during the intervention from pre-test to follow-up (repeated measures ANOVA). No differences between the control groups were noticed. The effect was significant on all the measures: phonological awareness, reading skills, writing skills and overall literacy skills. A transfer effect on school marks in Kiswahili and English was found. Following a discussion of the results, suggestions for further research and adaptation of the programme are presented.