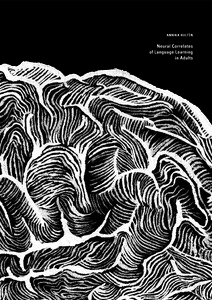 The human language-learning ability persists throughout life, indicating considerable flexibility at the cognitive and neural level. This ability spans from expanding the vocabulary in the mother tongue to acquisition of a new language with its lexicon and grammar. The present thesis consists of five studies that tap both of these aspects of adult language learning by using magnetoencephalography (MEG) and functional magnetic resonance imaging (fMRI) during language processing and language learning tasks.
The thesis shows that learning novel phonological word forms, either in the native tongue or when exposed to a foreign phonology, activates the brain in similar ways. The results also show that novel native words readily become integrated in the mental lexicon. Several studies in the thesis highlight the left temporal cortex as an important brain region in learning and accessing phonological forms. Incidental learning of foreign phonological word forms was reflected in functionally distinct temporal lobe areas that, respectively, reflected short-term memory processes and more stable learning that persisted to the next day. In a study where explicitly trained items were tracked for ten months, it was found that enhanced naming-related temporal and frontal activation one week after learning was predictive of good long-term memory. The results suggest that memory maintenance is an active process that depends on mechanisms of reconsolidation, and that these process vary considerably between individuals.
The thesis put special emphasis on studying language learning in the context of language production. The neural foundation of language production has been studied considerably less than that of perceptive language, especially on the sentence level. A well-known paradigm in language production studies is picture naming, also used as a clinical tool in neuropsychology. This thesis shows that accessing the meaning and phonological form of a depicted object are subserved by different neural implementations. Moreover, a comparison between action and object naming from identical images indicated that the grammatical class of the retrieved word (verb, noun) is less important than the visual content of the image. In the present thesis, the picture naming was further modified into a novel paradigm in order to probe sentence-level speech production in a newly learned miniature language. Neural activity related to grammatical processing did not differ between the novel language and the mother tongue, but stronger neural activation for the novel language was observed during the planning of the upcoming output, likely related to more demanding lexical retrieval and short-term memory.
In sum, the thesis aimed at examining language learning by combining different linguistic domains, such as phonology, semantics, and grammar, in a dynamic description of language processing in the human brain.