Soldiering and the making of Finnish manhood : conscription and masculinity in interwar Finland, 1918–1939 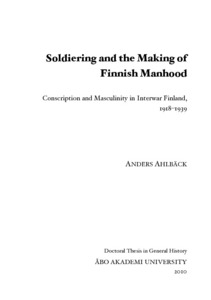 Military conscription and peacetime military service were the subjects of heated political, social and cultural controversies during the early years of national independence in Finland. Both the critics and the supporters of the existing military system described it as strongly formative of young men’s physical and moral development into adult men and male citizens. The conflicts over conscription prompted the contemporaries to express their notions about what Finnish men were like, at their best and at their worst, and what should and could be done about it.
This thesis studies military conscription as an arena for the “making of manhood” in peacetime Finnish society, 1918–1939. It examines a range of public images of conscripted soldiering, asking how soldiering was depicted and given gendered meanings in parliamentary debates, war hero myths, texts concerned with the military and civic education of conscripts, as well as in works of fiction and reminiscences about military training as a personal experience.
Studying conscription with a focus on masculinity, the thesis explores the different cultural images of manliness, soldiering and male citizenship on offer in Finnish society. It investigates how political parties, officers, educators, journalists, writers and “ordinary” conscripts used and developed, embraced or rejected these notions, according to their political purposes or personal needs.
The period between the two world wars can be described as a fast-forward into military modernity in Finland. In the process, European middle class gender ideologies clashed with Finnish agrarian masculinities. Nationalistic agendas for the militarisation of Finnish manhood stumbled against intense class conflicts and ideological resistance.
Military propaganda used images of military heroism, civic virtue and individual success to persuade the conscripts into ways of thinking and acting that were shaped by bourgeois mentality, nationalistic ideology and religious morality. These images are further analysed as expressive of the personal experiences and emotions of their middle-aged, male authors. The efforts of these military educators were, however, actively resisted on many fronts, ranging from rural working class masculinities among the conscripted young men to ideological critiques of the standing army system in parliament. In narratives about military training, masculinity was depicted as both strengthened and contradicted by the harsh and even brutal practices of interwar Finnish military training.
The study represents a combination of new military history and the historical study of men and masculinities. It approaches masculinity as a contested and highly political form of social and cultural knowledge that is actively and selectively used by historic actors. Instead of trying to identify a dominant or “hegemonic” form of masculinity within a pre-determined theoretical structure, this study examines how the meanings ascribed to manhood varied according to class, age, political ideology and social situation.
The interwar period in Finland can be understood as a period of contest between different notions of militarised masculinity, yet to judge by the materials studied, there was no clear winning party in that contest. A gradual movement from an atmosphere of conflict surrounding conscription towards political and cultural compromises can be discerned, yet this convergence was incomplete and many division lines remained.