The introduction of Mormonism to Finnish society, 1840-1900 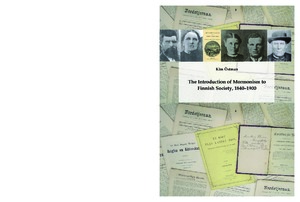 This study examines the place of The Church of Jesus Christ of Latter-day Saints (commonly known as the Mormon church) in the Russian Grand Duchy of Finland between the years 1840 and 1900. Attention is put on both the internal workings of the movement and the reactions of society. Theoretical insight is gained through the concepts of social construction and religious economies.
Mormon image formation in Finland began by 1840 through newspaper reports on activities abroad and through essays on the faith’s history and doctrine. Mormons are mentioned almost 3,500 times in Finnish newspapers between 1840 and 1900, and at least twelve unique book titles sold in the country were explicitly devoted to discussing Mormonism. Most of the publicity was derived from foreign sources. Discourse analysis of this textual corpus shows a hegemonic discourse that combined themes such as fraud, deception, and theocracy in explaining the Mormon movement. Accompanied by plural marriage, these themes contributed to the construction of a strongly negative image of Mormonism already before the first missionaries arrived in 1875. In a society with a stringently regulated religious economy, this image contributed to a high level of resistance by civil authorities and Lutheran clergy.
Twenty-five Mormon missionaries worked in Finland between 1875 and 1900, with a concentrated effort taking place between 1875 and 1889. At least 78 persons converted, mostly in the coastal areas among the Swedish-speaking minority population. Nine percent emigrated to Utah, 36% were excommunicated, others fell into oblivion, while still others clung to their new faith. The work was led from Sweden, with no stable church organization emerging among the isolated pockets of converts. Mormonism’s presence was thus characterized by private or small-group religiosity rather than a vibrant movement. The lack of religious community, conversation, and secondary socialization eventually caused the nineteenth-century manifestation of Finnish Mormonism to die out. Only one group of converts was perpetuated past World War II, after which large-scale proselytizing began.