Distribution and role of macrophytes in coastal lagoons : implications of critical shifts 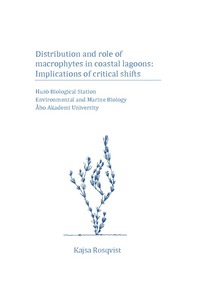 Crossroads, crucibles and refuges are three words that may describe natural
coastal lagoon environments. The words refer to the complex mix of marine
and terrestrial influences, prolonged dilution due to the semi-enclosed nature
and the function of a habitat for highly diverse plant and animal communities,
some of which are endangered. To attain a realistic picture of the present
situation, high vulnerability to anthropogenic impact should be added to the
description. As the sea floor in coastal lagoons is usually entirely photic,
macrophyte primary production is accentuated compared with open sea
environments. There is, however, a lack of proper knowledge on the
importance of vegetation for the general functioning of coastal lagoon
ecosystems. The aim of this thesis is to assess the role of macrophyte diversity,
cover and species identity over temporal and spatial scales for lagoon
functions, and to determine which steering factors primarily restrict the
qualitative and quantitative composition of vegetation in coastal lagoons. The
results are linked to patterns of related trophic levels and the indicative
potential of vegetation for assessment of general conditions in coastal lagoons
is evaluated.
This thesis includes five field studies conducted in flads and glo-flads in the
brackish water northern Baltic Sea. Flads and glo-flads are defined as a Baltic
variety of coastal lagoons, which due to an inlet threshold and post-glacial landuplift
slowly will be isolated from the open sea. This process shrinks inlet size,
increases exposure and water retention, and is called habitat isolation. The
studied coastal lagoons are situated in the archipelago areas of the eastern
coast of Sweden, the Åland Islands and the south-west mainland of Finland,
where land-uplift amounts to ca. 5 mm/ per year. Out of 400 evaluated sites, a
total of 70 lagoons varying in inlet size, archipelago position and anthropogenic
influence to cover for essential environmental variation were chosen for
further inventory. Vegetation composition, cover and richness were measured
together with several hydrographic and morphometric variables in the lagoons
both seasonally and inter-annually to cover for general regional, local and
temporal patterns influencing lagoon and vegetation development. On smaller
species-level scale, the effects of macrophyte species identity and richness for
the fish habitat function were studied by examining the influence of plant
interaction on juvenile fish diversity. Thus, the active election of plant monoand
polycultures by fish and the diversity of fish in the respective culture were
examined and related to plant height and water depth.
The lagoons and vegetation composition were found to experience a regime
shift initiated by increased habitat isolation along with land-uplift. Vegetation
composition altered, richness decreased and cover increased forming a less
isolated and more isolated regime, named the vascular plant regime and
charophyte regime, respectively according to the dominant vegetation. As total
phosphorus in the water, turbidity and the impact of regional influences
decreased in parallel, the dominance of charophytes and increasing cover
seemed to buffer and stabilize conditions in the charophyte regime and
indicated an increased functional role of vegetation for the lagoon ecosystem.
The regime pattern was unaffected by geographical differences, while strong
anthropogenic impact seemed to distort the pattern due to loss of especially
Chara tomentosa L. in the charophyte regime. The regimes were further found
unperturbed by short-time temporal fluctuations. In fact the seasonal and
inter-annual dynamics reinforced the functional difference between the
regimes by the increasing role of vegetation along habitat isolation and the
resemblance to lake environments for the charophyte regime. For instance,
greater total phosphorus and chlorophyll a concentrations in the water in the
beginning of the season in the charophyte regime compared with the vascular
plant regime presented a steeper reduction to even lower values than in the
vascular plant regime along the season. Despite a regional importance and
positive relationship of macrophyte diversity in relation to trophic diversity,
species identity was underlined in the results of this thesis, especially with
decreasing spatial scale. This result was supported partly by the increased role
of charophytes in the functioning of the charophyte regime, but even more
explicitly by the species-specific preference of juvenile fish for tall macrophyte
monocultures. On a smaller species-level scale, tall plant species in
monoculture seemed to be able to increase their length, indicating that negative
selection forms preferred habitat structures, which increase fish diversity. This
negative relationship between plant and fish diversity suggest a shift in
diversity patterns among trohic levels on smaller scale. Thus, as diversity
patterns seem complex and diverge among spatial scales, it might be
ambiguous to extend the understanding of diversity relationships from one
trophic level to the other.
All together, the regime shift described here presents similarities to the regime
development in marine lagoon environments and shallow lakes subjected to
nutrient enrichment. However, due to nutrient buffering by vegetation with
increased isolation and water retention as a consequence of the inlet threshold,
the development seems opposite to the course along an eutrophication
gradient described in marine lagoons lacking an inlet threshold, where the role
of vegetation decreases. Thus, the results imply devastating consequences of
inlet dredging (decreasing isolation) in terms of vegetation loss and nutrient
release, and call for increased conservational supervision. Especially the red
listed charophytes would suffer negatively from such interference and the
consequences are likely to also deteriorate juvenile fish production. The fact
that a new species to Finland, Chara connivens Salzm. Ex. Braun 1835 was
discovered during this study further indicates a potential of the lagoons serving
as refuges for rare species.