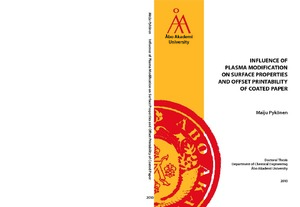 The properties of the paper surface play a crucial role in ensuring suitable quality and runnability in various converting and finishing operations, such as printing. Plasma surface modification makes it possible to modify the surface chemistry of paper without altering the bulk material properties. This also makes it possible to investigate the role of the surface chemistry alone on printability without influencing the porous structure of the pigment-coated paper. Since the porous structure of a pigment coating controls both ink setting and optical properties, surface chemical changes created by a plasma modification have a potential to decouple these two effects and to permit a better optimization of them both.
The aim of this work was to understand the effects of plasma surface modification on paper properties, and how it influences printability in the sheet-fed offset process. The objective was to broaden the fundamental understanding of the role of surface chemistry on offset printing. The effects of changing the hydrophilicity/ hydrophobicity and the surface chemical composition by plasma activation and plasma coatings on the properties of coated paper and on ink-paper interactions as well as on sheet-fed offset print quality were investigated. In addition, the durability of the plasma surface modification was studied. Nowadays, a typical sheet-fed offset press also contains units for surface finishing, for example UVvarnishing.
The role of the surface chemistry on the UV-varnish absorption into highly permeable and porous pigment-coated paper was also investigated.
With plasma activation it was possible to increase the surface energy and hydrophilicity of paper. Both polar and dispersion interactions were found to increase, although the change was greater in the polar interactions due to induced oxygen molecular groups. The results indicated that plasma activation takes place particularly in high molecular weight components such as the dispersion chemicals used to stabilize the pigment and latex particles. Surface composition, such as pigment and binder type, was found to influence the response to the plasma activation. The general trend was that pilot-scale treatment modified the surface chemistry without altering the physical coating structure, whereas excessive laboratory-scale
treatment increased the surface roughness and reduced the surface strength, which led to micro-picking in printing. It was shown that pilot-scale plasma activation in combination with appropriate ink oils makes it possible to adjust the ink-setting rate. The ink-setting rate decreased with linseed-oil-based inks, probably due to increased acid-base interactions between the polar groups in the oil and the plasma-treated paper surface. With mineral-oil-based inks, the ink setting accelerated due to plasma activation. Hydrophobic plasma coatings were able to reduce or even prevent the absorption of dampening water into pigmentcoated paper, even when the dampening water was applied under the influence of nip pressure. A uniform hydrophobic plasma coating with sufficient chemical affinity with ink gave an improved print quality in terms of higher print density and lower print mottle. It was also shown that a fluorocarbon plasma coating reduced the free wetting of the UV-varnish into the highly permeable and porous pigment coating. However, when the UV-varnish was applied under the influence of nip pressure, which leads to forced wetting, the role of the surface chemical composition seems to be much less.
A decay in surface energy and wettability occurred during the first weeks of storage after plasma activation, after which it leveled off. However, the oxygen/carbon elemental ratio did not decrease as a function of time, indicating that ageing could be caused by a re-orientation of polar groups or by a contamination of the surface. The plasma coatings appeared to be more stable when the hydrophobicity was higher, probably due to fewer interactions with oxygen and water vapor in the air.