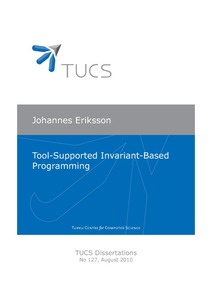 The development of correct programs is a core problem in computer science. Although formal verification methods for establishing correctness with mathematical rigor are available, programmers often find these difficult to put into practice. One hurdle is deriving the loop invariants and proving that the code maintains them. So called correct-by-construction methods aim to alleviate this issue by integrating verification into the programming workflow. Invariant-based programming is a practical correct-by-construction method in which the programmer first establishes the invariant structure, and then incrementally extends the program in steps of adding code and proving after each addition that the code is consistent with the invariants. In this way, the program is kept internally consistent throughout its development, and the construction of the correctness arguments (proofs) becomes an integral part of the programming workflow. A characteristic of the approach is that programs are described as invariant diagrams, a graphical notation similar to the state charts familiar to programmers. Invariant-based programming is a new method that has not been evaluated in large scale studies yet. The most important prerequisite for feasibility on a larger scale is a high degree of automation. The goal of the Socos project has been to build tools to assist the construction and verification of programs using the method. This thesis describes the implementation and evaluation of a prototype tool in the context of the Socos project. The tool supports the drawing of the diagrams, automatic derivation and discharging of verification conditions, and interactive proofs. It is used to develop programs that are correct by construction. The tool consists of a diagrammatic environment connected to a verification condition generator and an existing state-of-the-art theorem prover. Its core is a semantics for translating diagrams into verification conditions, which are sent to the underlying theorem prover. We describe a concrete method for 1) deriving sufficient conditions for total correctness of an invariant diagram; 2) sending the conditions to the theorem prover for simplification; and 3) reporting the results of the simplification to the programmer in a way that is consistent with the invariantbased programming workflow and that allows errors in the program specification to be efficiently detected. The tool uses an efficient automatic proof strategy to prove as many conditions as possible automatically and lets the remaining conditions be proved interactively. The tool is based on the verification system PVS and i uses the SMT (Satisfiability Modulo Theories) solver Yices as a catch-all decision procedure. Conditions that were not discharged automatically may be proved interactively using the PVS proof assistant. The programming workflow is very similar to the process by which a mathematical theory is developed inside a computer supported theorem prover environment such as PVS. The programmer reduces a large verification problem with the aid of the tool into a set of smaller problems (lemmas), and he can substantially improve the degree of proof automation by developing specialized background theories and proof strategies to support the specification and verification of a specific class of programs. We demonstrate this workflow by describing in detail the construction of a verified sorting algorithm. Tool-supported verification often has little to no presence in computer science (CS) curricula. Furthermore, program verification is frequently introduced as an advanced and purely theoretical topic that is not connected to the workflow taught in the early and practically oriented programming courses. Our hypothesis is that verification could be introduced early in the CS education, and that verification tools could be used in the classroom to support the teaching of formal methods. A prototype of Socos has been used in a course at Åbo Akademi University targeted at first and second year undergraduate students. We evaluate the use of Socos in the course as part of a case study carried out in 2007.