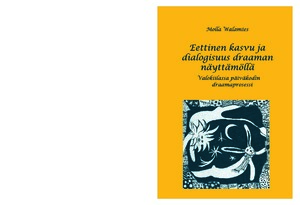 This research is a phenomenological-hermeneutic case-study based on the methods of action research in which narrative methods are used to examine a process drama carried out in a day-care centre, focusing on its dialogicality and possibilities of offering children and adults ethical problems to examine and solve.
A process drama built around a story was carried out in a Finnish day-care centre in 1999 with the aim of bringing ethical education to the level of conscious consideration and action. The research consists of two case-studies.
The first focuses on Risto, one of the children who participated in the process, his actions in group situations, his commitment to the rules set by the leaders, his attitude towards the group and its members as well as the common agreements concerning the group, and his solutions to fictive dilemmas in relation to Lawrence Kohlberg’s and Carol Gilligan’s concepts of justice and care. On this basis conclusions are made on how drama can be applied to dealing with ethical dilemmas with children aged four to seven. The second case-study searches for ethical themes and signs of dialogicality in the story that was created together by the children and leaders, and in the action that took place in the drama sessions.
The subjects of this study consist of two groups participating in the process drama, both consisting of seven children aged four to seven. Narratives were written on each child based on his/her participation in four drama sessions selected to be used in this study. The narratives include the writer’s interpretations of the dialogicality of the drama and the ethical themes observed and recognised in the videos and in the transcriptions of the video recordings.
The description and interpretation of the dialogicality and the ethical themes observed in the drama sessions is based on the researcher’s dialogue with the writings of Georg Henrik von Wright, Martin Buber and Mihail Bahtin, as well as Nicholas C. Burbules’ definitions of the basic conditions for dialogical teaching.
As a result of the study, drama activity proved to be a means by which dialogically abstract ethical questions and conflicts could be dealt with even with young children and which revealed the zone of proximal development of both children and adults. Drama became a stage for ethical growth and dialogicality, and the common play of children and adults could be seen as an indicator of deep dialogicality.
On the basis of this study, it can be said that drama is a very suitable way of establishing a shape and form of ethical education in which it is possible to make planned, target-oriented progress and which can be consciously observed by following the development of both the child and the educator.