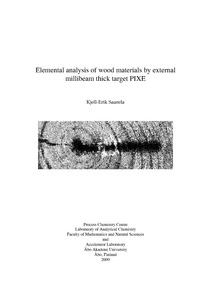 In bulk analyses, whole bark and sectors of discs of the stem wood were dry ashed at 550 ˚C. The ashes were homogenised by shaking and prepared to target pellets for PIXE analyses. This procedure generated representative samples to be analysed, but the enrichment also enabled quantification of some additional trace elements. The ash contents obtained as a product of the sample preparation procedure also showed to be of great importance in the evaluation of results in environmental studies.

Spot scans from the pith of pine wood outwards, showed clearly highest concentrations of manganese, calcium and zinc in the first spot irradiated, or 2-3 times higher than in the surrounding wood. For stem wood from the crown part of a pine this higher concentration level was found in the first four spots/mms, including the pith and the two following growth rings. Zinc showed increasing concentrations outwards in sapwood of the pine stem, with the over-all lowest concentrations in the inner half of the sapwood. This could indicate emigration of this element from sapwood being under transformation to heartwood.

The ash content of stem bark is up to and order higher than for the stem wood. However, when the elemental concentration in ashes of bark and wood of the same disc were compared, these are very similar – this when trees are growing at spots with no anthropogenic contamination from the atmosphere. The largest difference was obtained for calcium which appeared at two times high concentrations in ashes of bark than in ashes of the wood (ratio of 2).

Pine bark is often used in monitoring of atmospheric pollution, where concentrations in bark samples are compared. Here an alternative approach is suggested: Bark and the underlying stem wood of a pine trees are dry ashed and analysed. The elemental concentration in the bark ash is then compared to the concentration of the same element in the wood ash. Comparing bark to wood includes a normalisation for the varying availability of an element from the soil at different sites. When this comparison is done for the ashes of the materials, a normalisation is also obtained for the general and locally different enrichment of inorganic elements from wood to bark. Already a ratio >2 between the concentration in the bark ash and the concentration in the wood ash could indicate atmospheric pollution. For monitoring where bark is used, this way of “inwards” comparison is suggested - instead of comparing to results from analyses of bark from other trees (read reference areas), growing at sites with different soil and, locally, different climate conditions. This approach also enables evaluation of atmospheric pollution from sampling of only relative few individual trees –preferable during forest felling.