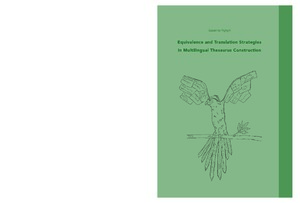 In the present dissertation, multilingual thesauri were approached as cultural products and the focus was twofold: On the empirical level the focus was placed on the translatability of certain British-English social science indexing terms into the Finnish language and culture at a concept, a term and an indexing term level. On the theoretical level the focus was placed on the aim of translation and on the concept of equivalence. In accordance with modern communicative and dynamic translation theories the interest was on the human dimension. The study is qualitative.
In this study, equivalence was understood in a similar way to how dynamic, functional equivalence is commonly understood in translation studies. Translating was seen as a decision-making process, where a translator often has different kinds of possibilities to choose in order to fulfil the function of the translation. Accordingly, and as a starting point for the construction of the empirical part, the function of the source text was considered to be the same or similar to the function of the target text, that is, a functional thesaurus both in source and target context. Further, the study approached the challenges of multilingual thesaurus construction from the perspectives of semantics and pragmatics. In semantic analysis the focus was on what the words conventionally mean and in pragmatics on the ‘invisible’ meaning - or how we recognise what is meant even when it is not actually said (or written).
Languages and ideas expressed by languages are created mainly in accordance with expressional needs of the surrounding culture and thesauri were considered to reflect several subcultures and consequently the discourses which represent them. The research material consisted of different kinds of potential discourses: dictionaries, database records, and thesauri, Finnish versus British social science researches, Finnish versus British indexers, simulated indexing tasks with five articles and Finnish versus British thesaurus constructors. In practice, the professional background of the two last mentioned groups was rather similar. It became even more clear that all the material types had their own characteristics, although naturally not entirely separate from each other. It is further noteworthy that the different types and origins of research material were not used to represent true comparison pairs, and that the aim of triangulation of methods and material was to gain a holistic view.
The general research questions were:
1. Can differences be found between Finnish and British discourses regarding family roles as thesaurus terms, and if so, what kinds of differences and which are the implications for multilingual thesaurus construction?
2. What is the pragmatic indexing term equivalence?
The first question studied how the same topic (family roles) was represented in different contexts and by different users, and further focused on how the possible differences were handled in multilingual thesaurus construction. The second question
was based on findings of the previous one, and answered to the final question as to what kinds of factors should be considered when defining translation equivalence in multilingual thesaurus construction.
The study used multiple cases and several data collection and analysis methods aiming at theoretical replication and complementarity. The empirical material and analysis consisted of focused interviews (with Finnish and British social scientists, thesaurus constructors and indexers), simulated indexing tasks with Finnish and British indexers, semantic component analysis of dictionary definitions and translations, coword analysis and datasets retrieved in databases, and discourse analysis of thesauri. As a terminological starting point a topic and case family roles was selected.
The results were clear:
1) It was possible to identify different discourses. There also existed subdiscourses. For example within the group of social scientists the orientation to qualitative versus quantitative research had an impact on the way they reacted to the studied words and discourses, and indexers placed more emphasis on the information seekers whereas thesaurus constructors approached the construction problems from a more material based solution. The differences between the different specialist groups i.e. the social scientists, the indexers and the thesaurus constructors were often greater than between the different geo-cultural groups i.e. Finnish versus British. The differences occurred as a result of different translation aims, diverging expectations for multilingual thesauri and variety of practices. For multilingual thesaurus construction this means severe challenges. The clearly ambiguous concept of multilingual thesaurus as well as different construction and translation strategies should be considered more precisely in order to shed light on focus and equivalence types, which are clearly not self-evident. The research also revealed the close connection between the aims of multilingual thesauri and the pragmatic indexing term equivalence.
2) The pragmatic indexing term equivalence is very much context-depended. Although thesaurus term equivalence is defined and standardised in the field of library and information science (LIS), it is not understood in one established way and the
current LIS tools are inadequate to provide enough analytical tools for both constructing and studying different kinds of multilingual thesauri as well as their indexing term equivalence. The tools provided in translation science were more practical and theoretical, and especially the division of different meanings of a word provided a useful tool in analysing the pragmatic equivalence, which often differs from the ideal model represented in thesaurus construction literature.
The study thus showed that the variety of different discourses should be acknowledged, there is a need for operationalisation of new types of multilingual thesauri, and the factors influencing pragmatic indexing term equivalence should be discussed more precisely than is traditionally done.