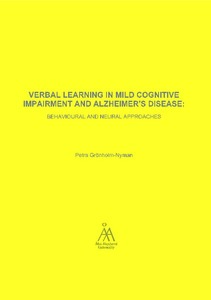 The main focus of the present thesis was at verbal episodic memory processes that are particularly vulnerable to preclinical and clinical Alzheimer’s disease (AD). Here these processes were studied by a word learning paradigm, cutting across the domains of memory and language learning studies. Moreover, the differentiation between normal aging, mild cognitive impairment (MCI) and AD was studied by the cognitive screening test CERAD.
In study I, the aim was to examine how patients with amnestic MCI differ from healthy controls in the different CERAD subtests. Also, the sensitivity and specificity of the CERAD screening test to MCI and AD was examined, as previous studies on the sensitivity and specificity of the CERAD have not included MCI patients. The results indicated that MCI is characterized by an encoding deficit, as shown by the overall worse performance on the CERAD Wordlist learning test compared with controls. As a screening test, CERAD was not very sensitive to MCI.
In study II, verbal learning and forgetting in amnestic MCI, AD and healthy elderly controls was investigated with an experimental word learning paradigm, where names of 40 unfamiliar objects (mainly archaic tools) were trained with or without semantic support. The object names were trained during a 4-day long period and a follow-up was conducted one week, 4 weeks and 8 weeks after the training period. Manipulation of semantic support was included in the paradigm because it was hypothesized that semantic support might
have some beneficial effects in the present learning task especially for the MCI group, as semantic memory is quite well preserved in MCI in contrast to episodic memory. We found that word learning was significantly impaired in MCI and AD patients, whereas forgetting patterns were similar across groups. Semantic support showed a beneficial effect on object name retrieval in the MCI group 8 weeks after training, indicating that the MCI patients’ preserved semantic memory abilities compensated for their impaired episodic memory. The MCI group performed equally well as the controls in the tasks tapping incidental learning and recognition memory, whereas the AD group showed impairment. Both the MCI and the AD group benefited less from phonological cueing than the controls. Our findings indicate that acquisition is compromised in both MCI and AD, whereas long13 term retention is not affected to the same extent. Incidental learning and recognition memory seem to be well preserved in MCI.
In studies III and IV, the neural correlates of naming newly learned objects were examined in healthy elderly subjects and in amnestic MCI patients by means of positron emission tomography (PET) right after the training period. The naming of newly learned objects by healthy elderly subjects recruited a left-lateralized network, including frontotemporal regions and the cerebellum, which was more extensive than the one related to the naming of familiar objects (study III). Semantic support showed no effects on the PET results for the healthy subjects. The observed activation increases may reflect lexicalsemantic and lexical-phonological retrieval, as well as more general associative memory mechanisms. In study IV, compared to the controls, the MCI patients showed increased anterior cingulate activation when naming newly learned objects that had been learned without semantic support. This suggests a recruitment of additional executive and attentional resources in the MCI group.