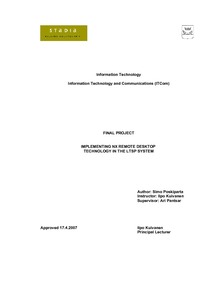 This project focuses on studying and testing the benefits of the NX Remote Desktop technology in administrative use for Finnish Meteorological Institutes existing Linux Terminal Service Project environment. This was done due to the criticality of the system caused by growing number of users as the Linux Terminal Service Project system expands. Although many of the supporting tasks can be done via Secure Shell connection, testing graphical programs or desktop behaviour in such a way is impossible. At first basic technologies behind the NX Remote Desktop were studied, and after that started the testing of two possible programs, FreeNX and NoMachine NX server. Testing the functionality and bandwidth demands were first done in a closed local area network, and results were studied. The better candidate was then installed in a virtual server simulating actual Linux Terminal Service Project server at Finnish Meteorological Institute and connection from Internet was tested to see was there any problems with firewalls and security policies. The results are reported in this study. Studying and testing the two different candidates of NX Remote Desktop showed, that NoMachine NX Server provides better customer support and documentation. Security aspects of the Finnish Meteorological Institute had also to be considered, and since updates along with the new developing tools are announced in next version of the program, this version was the choice. Studies also show that even NoMachine promises a swift connection over an average of 20Kbit/s bandwidth, at least double of that is needed. This project gives an overview of available remote desktop products along their benefits. NX Remote Desktop technology is studied, and installation instructions are included. Testing is done in both, closed and the actual environment and problems and suggestions are studied and analyzed. The installation to the actual LTSP server is not yet made, but a virtual server is put up in the same place in the view of network topology. This ensures, that if the administrators are satisfied with the system, installation and setting up the system will go as described in this report.