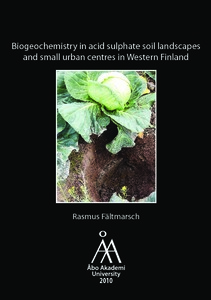 The overall purpose of this thesis was to increase the knowledge on the biogeochemistry of rural acid sulphate (AS) soil environments and urban forest ecosystems near small towns in Western Finland. In addition, the potential causal relationship between the distribution of AS soils and geographical occurence of multiple sclerosis (MS) disease was assessed based on a review of existing literature and data.
Acid sulphate soils, which occupy an area of approximately 17–24 million hectare worldwide, are regarded as the nastiest soils in the world. Independent of the geographical locality of these soils, they pose a great threat to their surrounding environment if disturbed. The abundant metal-rich acid drainage from Finnish AS soils, which is a result of sulphide oxidation due to artificial farmland drainage, has significant but spatially and temporally variable ecotoxicological impacts on biodiversity and community structure of fish, benthic invertebrates and macrophytes. This has resulted in mass fish kills and even eradication of sensitive fish species in affected waters. Moreover, previous investigations demonstrated significantly enriched concentrations of Co, Ni, Mn and Al, metals which are abundantly mobilised in AS soils, in agricultural crops (timothy grass and oats) and approximately 50 times higher concentrations of Al in cow milk originating from AS soils in Western Finland. Nevertheless, the results presented here demonstrate, in general, relatively moderate metal concentrations in oats and cabbage grown on AS soils in Western Finland, although some of the studied fields showed anomalous values of metals (e.g. Co and Ni) in both the soil and target plants (especially oats), similar to that of the previous investigations. The results indicated that the concentrations of Co, Ni, Mn and Zn in oats and Co and Zn in cabbage were governed by soil geochemistry as these metals were correlated with corresponding concentrations extracted from the soil by NH4Ac-EDTA and NH4Ac, respectively. The concentrations of Cu and Fe in oats and cabbage were uncorrelated to that of the easily soluble concentrations in the soils, suggesting that biological processes (e.g. plant-root processes) overshadow geochemical variation. The concentrations of K and Mg in cabbage, which showed a low spread and were strongly correlated to the NH4Ac extractable contents in the soil, were governed by both the bioavailable fractions in the topsoil and plant-uptake mechanisms. The plant´s ability to regulate its uptake of Ca and P (e.g. through root exudates) seemed to be more important than the influence of soil geochemistry.
The distribution of P, K, Ca, Mg, Mn and S within humus, moss and needles in and around small towns was to a high degree controlled by biological cycling, which was indicated by the low correlation coefficients for P, K, Ca, Mg and S between humus and moss, and the low spread of these nutrients in moss and needles. The concentration variations of elements in till are mainly due to natural processes (e.g. intrusions, weathering, mineralogical variations in the bedrock). There was a strong spatial pattern for B in humus, moss and needles, which was suggested to be associated with anthropogenic emissions from nearby town centres. Geogenic dust affected the spatial distribution of Fe and Cr in moss, while natural processes governed the Fe anomaly found in the needles. The spatial accumulation patterns of Zn, Cd, Cu, Ni and Pb in humus and moss were strong and diverse, and related to current industry, the former steel industry, coal combustion, and natural geochemical processes. An intriguing Cu anomaly was found in moss. Since it was located close to a main railway line and because the railway line´s electric cables are made of Cu, it was suggested that the reason for the Cu anomaly is corrosion of these cables.
In Western Finland, where AS soils are particularly abundant and enrich the metal concentrations of stream waters, cow milk and to some extent crops, an environmental risk assessment would be motivated to elucidate if the metal dispersion affect human health. Within this context, a topic of concern is the distribution of multiple sclerosis as high MS prevalence rates are found in the main area of AS soils. Regionally, the AS soil type in the Seinäjoki area has been demonstrated to be very severe in terms of metal leaching, this area also shows one of the highest MS rates reported worldwide. On a local scale, these severe AS soil types coincide well with the corresponding MS clustering along the Kyrönjoki River in Seinäjoki. There are reasons to suspect that these spatial correlations are causal, as multiple sclerosis has been suggested to result from a combination of genetic and environmental factors.