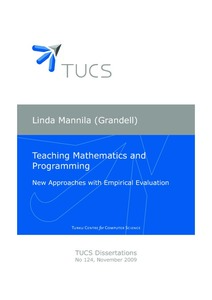 Programming and mathematics are core areas of computer science (CS) and consequently also important parts of CS education. Introductory instruction in these two topics is, however, not without problems. Studies show that CS students find programming difficult to learn and that teaching mathematical topics to CS novices is challenging. One reason for the latter is the disconnection between mathematics and programming found in many CS curricula, which results in students not seeing the relevance of the subject
for their studies. In addition, reports indicate that students' mathematical capability and maturity levels are dropping.
The challenges faced when teaching mathematics and programming at CS departments can also be traced back to gaps in students' prior education. In Finland the high school curriculum does not include CS as a subject; instead, focus is on learning to use the computer and its applications as tools. Similarly, many of the mathematics courses emphasize application of formulas, while logic, formalisms and proofs, which are important in CS, are avoided. Consequently, high school graduates are not well prepared for studies in CS.
Motivated by these challenges, the goal of the present work is to describe new approaches to teaching mathematics and programming aimed at addressing these issues:
Structured derivations is a logic-based approach to teaching mathematics, where formalisms and justifications are made explicit. The aim is to help students become better at communicating their reasoning using mathematical language and logical notation at the same time as they become more confident with formalisms.
The Python programming language was originally designed with education in mind, and has a simple syntax compared to many other popular languages. The aim of using it in instruction is to address algorithms and their implementation in a way that allows focus to be put on learning algorithmic thinking and programming instead of on learning a complex syntax.
Invariant based programming is a diagrammatic approach to developing programs that are correct by construction. The approach is based on elementary propositional and predicate logic, and makes explicit the underlying mathematical foundations of programming. The aim is also to show how mathematics in general, and logic in particular, can be used to create better programs.