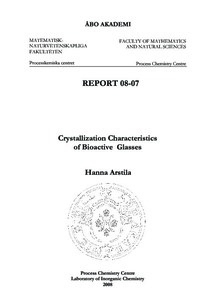 Bioactive glasses are excellent candidates for implant materials, because they can form a chemical bond to bone or guide bone growth, depending on the glass composition. Some compositions have even shown soft tissue attachment and antimicrobial effects. So far, most clinical applications are based on monoliths, plates and particulates of different grain sizes. There is a growing interest in special products such as porous implants sintered from microspheres and fibers drawn from preforms or glass melts. The viscosity range at which these are formed coincides with the crystallization temperature range for most bioactive glasses, thus complicating the manufacturing process.
In this work, the crystallization tendency and its kinetics for a series of glasses with their compositions within the range of bioactivity were investigated. The factors affecting crystallization and how it is related to composition were studied by means of thermal analysis and hot stage microscopy. The crystal compositions formed during isothermal and non-isothermal heat treatments were analyzed with SEM-EDXA and X-ray diffraction analysis. The temperatures at which sintering and fiber drawing can take place without interfering with crystallization were determined and glass compositions which are suitable for these purposes were established. The bioactivity of glass fibers and partly crystallized glass plates was studied by soaking them in simulated body fluid (SBF). The thickness of silica, calcium and phosphate rich reaction layers on the glass surface after soaking was used as an indication of the bioactivity.
The results indicated that the crystallization tendencies of the experimental glasses are strongly dependent on composition. The main factor affecting the crystallization was found to be the alkali oxide content: the higher the alkali oxide content the lower the crystallization temperature. The primary crystalline phase formed at low temperatures in these glasses was sodium calcium silicate. The crystals were found to form through internal nucleation, leading to bulk crystallization. These glasses had high bioactivity in vitro. Even when partially crystalline, they formed typical reaction layers, indicating bioactivity. In fact, sodium calcium silicate crystals were shown to transform in vitro into hydroxyapatite during soaking. However, crystallization should be avoided because it was shown to retard dissolution, bioactivity reactions and complicate fiber drawing process. Glass compositions having low alkali oxide content showed formation of wollastonite crystals on the surface, at about 300°C above the glass transition temperature. The wide range between glass transition and crystallization allowed viscous flow sintering of these compositions. These glasses also withstood the thermal treatments required for fiber drawing processing.
Precipitation of calcium and phosphate on fibers of these glasses in SBF suggested that they were osteoconductive.
Glasses showing bioactivity crystallize easily, making their hot working challenging. Undesired crystallization can be avoided by choosing suitable compositions and heat treatment parameters, allowing desired product forms to be attained. Small changes in the oxide composition of the glass can have large effects and therefore a thorough understanding of glass crystallization behavior is a necessity for a successful outcome, when designing and manufacturing implants containing bioactive glasses.