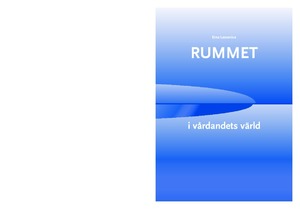 This study is made in the context of basic research within the field ofcaring science. The aim is to make a theoretical and ontological investigation of what the space is in the world of caring. The basic proposition is that the space, as a fundamental dimension, has an impact on how the appreciation of one's mental health and suffering is shaped, and vice versa. The overall purpose is to develop a theoretical model of space from the caring science point of view andalso to offer an ideal concept of space to caring science. Guided by a theoretical horizon (Eriksson 1993, Eriksson 1995, Eriksson 2001) and methodological approach grounded in Gadamer's philosophic and existential hermeneutics a three-stage analysis and interpretation is conducted. The hermeneutic spiral of this investigation starts through a procedure in accordance with Eriksson's model (1997) of concept definition. The goal is to clarify the etymology of the concept as well as semantic differences between synonymous concepts, i.e. to identify the different extents of the concept of `space` (`rum`) in order to bring these closer for an exploration. The second phase is to analyse and interpret a sample of narratives in order to explicate the ontological nature and meaning of the space. The material used here is literary texts. The goal is to clarify the characteristics of the very inside of the space when it is shaped in relation to the human being in encountering suffering. In the third phase an interview study is taken place. The focus of the study is directed towards the phenomenon of space as it is known by a patient in a landscape of psychiatric care, i.e. what the space is in a contextual meaning. Then, a gradual hermeneutic understanding of the space is attempted by using theories from the field of caring science as well as additional theories from other disciplines. Metaphors are used as they are vivid and expressive tools for generating meaning. Different metaphoric space formations depict here a variety of purports that, although not quite the same, share extensive elements. Six metaphorically summarized entities of meaning emerged. The comprehensive form of space is pointed out as the Mobile-Immobile Room. Furthermore, the Standby, the Asylum, the Wall and the Place. In the further dialogue with the texts the understanding has deepened ontologically. The theoretical model ofthe space sums up the vertical, horizontal and the inward extent of deepness inthe movement of mental health. Three entities of ontological meaning have emerged as three significant rooms: the Common Land emerges as the ideal concept of mutual creation in the freedom of doing, being and becoming health. On the interpersonal level it means freedom, which includes sovereignty, choice and dignity of the human being. The Ice World signifies, ultimately, the space as a kind of frozenness of despair which "wallpapers" the person's entire being in the world in the drama of suffering. The Spiritual Home is shaped when the human being has acquired the very core of his/her inner and outer placeness as a kind of "at-homeness" and rootedness. Time is a central element and the inward extent of deepness of this trialectic space. Each of the metaphors is then the human being's unique, although even paradoxical, way of conceiving reality, and mastering spiritual suffering. They condense characteristic structures and patterns of dynamic scenery, which take place within the movement of health. The space encloses a contradictory spatiality constituted through the dynamic field of meaningfulness and meaninglessness. Anyway, it is not through a purging of these contradictions but through bringing them together in a drama of suffering that the space is shaped as ontologically good and meaningful in the world of caring.