Dialogue in the crisis of representation : realism and antirealism in the context of the conversation between theologians and quantum physicists in Göttingen 1949-1961 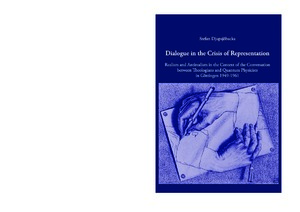 The aim of this study is to analyse the content of the interdisciplinary conversations in Göttingen between 1949 and 1961. The task is to compare models for describing reality presented by quantum physicists and theologians. Descriptions of reality indifferent disciplines are conditioned by the development of the concept of reality in philosophy, physics and theology. Our basic problem is stated in the question: How is it possible for the intramental image to match the external object?Cartesian knowledge presupposes clear and distinct ideas in the mind prior to observation resulting in a true correspondence between the observed object and the cogitative observing subject. The Kantian synthesis between rationalism and empiricism emphasises an extended character of representation. The human mind is not a passive receiver of external information, but is actively construing intramental representations of external reality in the epistemological process. Heidegger's aim was to reach a more primordial mode of understanding reality than what is possible in the Cartesian Subject-Object distinction. In Heidegger's philosophy, ontology as being-in-the-world is prior to knowledge concerning being. Ontology can be grasped only in the totality of being (Dasein), not only as an object of reflection and perception. According to Bohr, quantum mechanics introduces an irreducible loss in representation, which classically understood is a deficiency in knowledge. The conflicting aspects (particle and wave pictures) in our comprehension of physical reality, cannot be completely accommodated into an entire and coherent model of reality. What Bohr rejects is not realism, but the classical Einsteinian version of it. By the use of complementary descriptions, Bohr tries to save a fundamentally realistic position. The fundamental question in Barthian theology is the problem of God as an object of theological discourse. Dialectics is Barth¿s way to express knowledge of God avoiding a speculative theology and a human-centred religious self-consciousness. In Barthian theology, the human capacity for knowledge, independently of revelation, is insufficient to comprehend the being of God. Our knowledge of God is real knowledge in revelation and our words are made to correspond with the divine reality in an analogy of faith. The point of the Bultmannian demythologising programme was to claim the real existence of God beyond our faculties. We cannot simply define God as a human ideal of existence or a focus of values. The theological programme of Bultmann emphasised the notion that we can talk meaningfully of God only insofar as we have existential experience of his intervention. Common to all these twentieth century philosophical, physical and theological positions, is a form of anti-Cartesianism. Consequently, in regard to their epistemology, they can be labelled antirealist. This common insight also made it possible to find a common meeting point between the different disciplines. In this study, the different standpoints from all three areas and the conversations in Göttingen are analysed in the frameworkof realism/antirealism. One of the first tasks in the Göttingen conversations was to analyse the nature of the likeness between the complementary structures inquantum physics introduced by Niels Bohr and the dialectical forms in the Barthian doctrine of God. The reaction against epistemological Cartesianism, metaphysics of substance and deterministic description of reality was the common point of departure for theologians and physicists in the Göttingen discussions. In his complementarity, Bohr anticipated the crossing of traditional epistemic boundaries and the generalisation of epistemological strategies by introducing interpretative procedures across various disciplines.