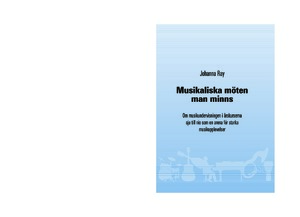 Earlier research has shown that strong experiences related to music (SEM) can occur in very different contexts and take on many different forms. Experiences like these seem significant and have among other things reportedly had an affect on the individual's continuing relationship towards music, which makes them interesting from a pedagogical point of view. Formal teaching situations, though, are under-represented in studies where people have been asked to describe strong experiences that they have had in connection with music. The purpose of my thesis is to investigate what SEM may mean to pupils and teachers in lower secondary school (grades 7-9), and to inquire more deeply into the potential "space" for such experiences within school music education. On a comprehensive level my ambition is to deepen the understanding for SEM as a possible element in pedagogical situations. Three empirical perspectives are employed: pupil-, teacher- and curriculum perspectives. The pupil perspective involved an analysis of written accounts of 166 fifteen-year-olds, describing own strong experiences. The teacher perspective involved studying 28 music teachers' conceptions of the purpose of teaching music in school as well as their understanding about strong music experiences in school context. Further, the teachers' descriptions of SEM that they have had themselves were analysed. The curriculum perspective is reflected through a study of how music experience was represented in 24 local and 2 national curriculum texts for music. Grounded in a phenomenological-hermeneutical perspective the material have been analyzed both qualitatively and quantitatively. The result points towards the fact that the music education in school has the potential to become an arena for SEM and that this can happen in relation to a multitude of activities and genres and take on many different expressions. Only one pupil referred to a musical encounter in the classroom environment; all other experiences that occurred inside the frame of school activity had taken place in other arenas (the school hall, public concert halls, and so on). However, more than 98 % of the descriptions concerned musical encounters in leisure time contexts. The significance of SEM is further clarified by narrative constructions. SEM as a conception does not occur on the curriculum level; however the analyze revealed a number of interesting "openings" which are illustrated. Even though all teachers displayed a fundamentally positive attitude towards the idea of regarding SEM as a feature of formal musical learning, it became clear that many teachers never had approached this theme from a pedagogical point of view before. Still, they proved to have an evident "familiarity" towards the phenomenon based on their own experiences of receptive and performative musical encounter. The possible space for strong musical experiences within school music education is specified through a detailed illustration of six specific themes derived from the reasoning of the teachers. Furthermore, this is described through a mapping of the potential experiencing zone, constructed from the teachers descriptions of educational aims.