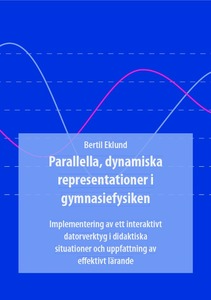 The computer is a useful tool in the teaching of upper secondary school physics, and should not have a subordinate role in students' learning process. However, computers and computer-based tools are often not available when they could serve their purpose best in the ongoing teaching. Another problem is the fact that commercially available tools are not usable in the way the teacher wants. The aim of this thesis was to try out a novel teaching scenario in a complicated subject in physics, electrodynamics. The didactic engineering of the thesis consisted of developing a computer-based simulation and training material, implementing the tool in physics teaching and investigating its effectiveness in the learning process. The design-based research method, didactic engineering (Artigue, 1994), which is based on the theoryof didactical situations (Brousseau, 1997), was used as a frame of reference for the design of this type of teaching product. In designing the simulation tool a general spreadsheet program was used. The design was based on parallel, dynamic representations of the physics behind the function of an AC series circuit in both graphical and numerical form. The tool, which was furnished with possibilities to control the representations in an interactive way, was hypothesized to activate the students and promote the effectiveness of their learning. An effect variable was constructed in order to measure the students' and teachers' conceptions of learning effectiveness. The empirical study was twofold. Twelve physics students, who attended a course in electrodynamics in an upper secondary school, participated in a class experiment with the computer-based tool implemented in three modes of didactical situations: practice, concept introduction and assessment. The main goal of the didactical situations was to have students solve problems and study the function of AC series circuits, taking responsibility for theirown learning process. In the teacher study eighteen Swedish speaking physics teachers evaluated the didactic potential of the computer-based tool and the accompanying paper-based material without using them in their physics teaching. Quantitative and qualitative data were collected using questionnaires, observations and interviews. The result of the studies showed that both the group of students and the teachers had generally positive conceptions of learning effectiveness. The students' conceptions were more positive in the practice situation than in the concept introduction situation, a setting that was more explorative. However, it turned out that the students' conceptions were also positive in the more complex assessment situation. This had not been hypothesized. A deeper analysis of data from observations and interviews showed that one of the students in each pair was more active than the other, taking more initiative and more responsibilityfor the student-student and student-computer interaction. These active studentshad strong, positive conceptions of learning effectiveness in each of the threedidactical situations. The group of less active students had a weak but positive conception in the first iv two situations, but a negative conception in the assessment situation, thus corroborating the hypothesis ad hoc. The teacher study revealed that computers were seldom used in physics teaching and that computer programs were in short supply. The use of a computer was considered time-consuming. As long as physics teaching with computer-based tools has to take place in special computer rooms, the use of such tools will remain limited. The affordance is enhanced when the physical dimensions as well as the performance of the computer are optimised. As a consequence, the computer then becomes a real learning tool for each pair of students, smoothly integrated into the ongoing teaching in the same space where teaching normally takes place. With more interactive support from the teacher, the computer-based parallel, dynamic representations will be efficient in promoting the learning process of the students with focus on qualitative reasoning - an often neglected part of the learning process of the students in upper secondary school physics.