The cultural dimension in focus : promoting awareness of diversity and respect for difference in a Finland-Swedish EFL classroom 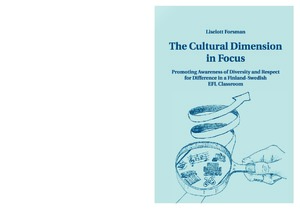 This study addresses the role of EFL education, its potential and shortcomings, and the challenges the future of EFL education will bring. It is argued that new societal demands and the limited time we have at our disposal in the classroom make it necessary to rethink goals and content and move away from the transmissionof limited sets of facts and information to helping students develop awareness and competences that can be applied in many different situations, also in a perspective of lifelong learning. The overall aim of the current study is to problematize and increase understanding of the implementation of cultural aspects in the language classroom by addressing the interrelated what, why and how of the cultural dimension within EFL education. This has been conducted by means of theoretical explorations into the area, alongside an attempt at promoting intercultural competence (IC) in a more systematic and insightful manner within my own educational praxis. The focus of the intercultural work in the classroom was on the promotion of awareness of difference and diversity, as well as respect for such difference through the ability to decenter from cultural norms and behavior that previously have been taken for granted. These are two elements that have been suggested as fundamental for other work with IC in the classroom and for the realization of important aspects of the underlying values of basic education. In the context of this study, IC comprises several interconnected components supportingeach other in a variety of ways, with the further aim being interaction with and respect for difference in general, not only concerning e.g. representatives ofcertain English-speaking communities. The methodology was informed by action research, with myself in the role of the teacher-researcher or the reflective practitioner. For the purpose of the project I was authorized to take on the EFL education for the three years of upper comprehensive school of one random class of students originally assigned to one of the language teachers of the selected Finland-Swedish school. Thus, the class of 17 students was not specifically chosen for the project, and the aims and contents chosen for the development project were placed within the framework of the ordinary curriculum. By exploring the students¿ insights concerning different English-speaking cultural groups, mainly through a set of questionnaires, it was possible to outline the work with the cultural dimension in the classroom for the following three years. Work progress was evaluated at specific stages, and the final project evaluations were conducted through individual student interviews in grade 9. The interviews were focused on possible development of students¿ insights concerning different aspects of the cultural dimension. In particular this concerned awareness of difference and diversity, including modification of stereotypes, as well as the ability to decenterin order to be better able to respect such difference. I also explored students¿ awareness and views of the activities and approaches used in class, as well asaffordances both inside and outside the EFL classroom in relation to these intended insights. A further focus area was the perceived relevance to students of different aspects of the cultural dimension. The frameworks and approaches adopted for the work in the classroom all have in common that they are based on a constructivist framework, where knowledge is constructed and reconstructed through interaction with one¿s social and cultural environment, including interaction with others. Reflective processes precede or are simultaneous with the learning of basic factual knowledge. This entails a view of learning as a progression from simple to more complex models rather than as a progression from facts to understanding and analysis. Here, the development of intercultural competence is seen asa cyclical process, or along a spiral curriculum, from simple to more complex levels through a combination of cognitive, affective and behavioral elements within a framework of experiential learning. This project has shown one possible wayforward concerning the development of intercultural competence within EFL education through a more systematic and comprehensive approach regarding linguistic and cultural aspects. The evaluation of the educational process explored in the study suggests the possibilities for work with the promotion of awareness of difference and diversity concerning some specific context that, based on students¿ prior knowledge and preconceptions, would benefit from further work. In this case, the specific context primarily concerned different aspects of both cultural and linguistic conditions in the UK. It is also suggested that many students developed the ability to decenter, described in the study as integral to being able to respect otherness. What still remains to be explored are more individualized approaches considering students¿ different levels of departure. Further work alsoneeds to be put into how to apply insights gained in these specific situations to more general contexts. It is also necessary to explore the use of the suggested approaches in a wider range of different contexts.