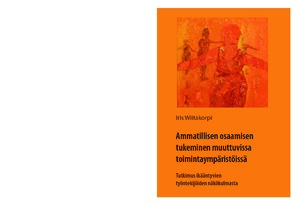 The purpose of the study was to describe the experiences of received support of aging employees and their work related self-image in changing working environments. Firstly, theaim was to discover how the support from organisations and leaders was verified. Secondly, the aim was to get answers how employees experienced themselves as workers and as learners in the current work context. Thirdly, the aim was to compare different knowledge information stages and company cultures and how they have influenced the experiences of professional competence development among aging employees. In addition the education- and career backgrounds were investigated to gain more understanding of their role in experiencing support and relation to the occupational self-image. The theoretical frame of reference of this researchis multidisciplinary. The theoretical part focuses on the meaning of work for human being from a sociological, late-modern perspective. On the other hand it examines the ageing process from a physiological and also from a perspective of age discrimination and life control. The occupational selfimage and the strength of motivation has an effect on learning in working life which is crucial and firmpart individual trajectories. According to the theoretical review company culture, leadership and especially the managers' role as a creator of a learning atmosphere are increasingly critical for aging adults' learning when the role of informal work-based learning is increasing. The empirical data was collected with aquestionnaire and interviews, which were carried out in May to October 2001. The data consists of 263 respondents of which further eight persons were interviewed. All respondents were over the age of 45 and represented all levels of their organisations in an IT-technology firm and a chemical industry plant. The central findings in this research show that the aging adults have experienced that theemployers do care about the development of their occupational skills. On the other hand there are fewer concrete activities to reveal this support. There is anobvious disproportion between the expressed aims and the realisation of the activities. Signs of age discrimination are few. The style of management has becomemore supporting for self directed activities which are seen to support adults learning. Higher education and individual activity to seek possibilities to learnwere encouraging the development of occupational skills. Age itself was not a crucial aspect when comparing the experiences among younger (45-54 years) and older (55-64 years) groups. Job satisfaction and professional self esteem seemed tobe considerably strong. The individual characteristics were more important elements in developing occupational skills than the age. The degree of anxiety at work was low. In addition among the older group the strong feeling of coherence and the occupational self image were significant for supporting the professional competence. The motivation to learn was also stable. Among the seniors there was some slight evidence of declining motivation. In the IT-firm the support was experienced stronger for aging employees than in the chemical industry plant. Thosewho had experienced support in the chemical industry plant had higher educational background than the others. In IT-firm they also experienced more support from the manager than in the chemical industry plant. The results show that it is more likely that the differences are caused mostly by the stage of information intensity and the character of company culture which is determined by the activities. IT-business demands constantly accommodation to changes and the chemical industry plant which is representing more traditional business field, where the atmosphere of learning is determined by the traditions of company culture, the changes are carried out slowly.