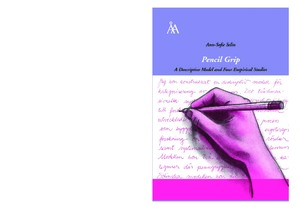 Previous studies on pencil grip have typically dealt with the developmental aspects in young children while handwriting research is mainly concerned with speed and legibility. Studies linking these areas are few. Evaluation of the existing pencil grip studies is hampered by methodological inconsistencies. The operational definitions of pencil grip arerational but tend to be oversimplified while detailed descriptors tend to be impractical due to their multiplicity. The present study introduces a descriptive two-dimensional model for the categorisation of pencil grip suitable for research applications in a classroom setting. The model is used in four empirical studies of children during the first six years of writing instruction. Study 1 describes the pencil grips observed in a large group of pupils in Finland (n = 504). The results indicate that in Finland the majority of grips resemble the traditional dynamic tripod grip. Significant genderrelated differences in pencil grip were observed. Study 2 is a longitudinal exploration of grip stability vs. change (n = 117). Both expected and unexpected changes were observed in about 25 per cent of the children's grips over four years. A new finding emerged using the present model for categorisation: whereas pencil grips would change, either in terms of ease of grip manipulation or grip configuration, no instances were found where a grip would have changed concurrently on both dimensions. Study 3 is a cross-cultural comparison of grips observed in Finland and the USA (n = 793). The distribution of the pencil grips observed in the American pupils was significantly different from those found in Finland. The cross-cultural disparity is most likely related to the differences in the onset of writing instruction. The differences between the boys' and girls' grips in the American group were non-significant.An implication of Studies 2 and 3 is that the initial pencil grip is of foremost importance since pencil grips are largely stable over time. Study 4 connects the pencil grips to assessment of the mechanics of writing (n = 61). It seems that certain previously not recommended pencil grips might nevertheless be includedamong those accepted since they did not appear to hamper either fluency or legibility.