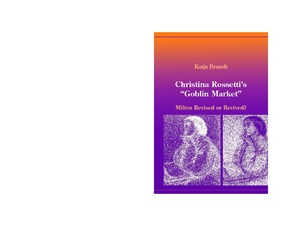 The present study examines Christina Rossetti's (1830-94) best-known poem "Goblin Market" (1859) as a response to John Milton's (1608-74) Paradise Lost (1667) and Paradise Regained (1674). Rossetti's poem relates to Milton's twin epics with a surprising degree of complexity, something that the thesis demonstrates through a large number of hitherto unexplored textual parallels. In its recontextualisation of Rossetti's poetry, this study balances interpretative strategies evolved by feminism with more historicist readings. SinceGilbert and Gubar's landmark feminist work of 1979, it has become something of a critical commonplace that Milton was a figure of patriarchal oppression whom women writers have challenged through revision. As a consequence, intertextual Rossetti studies have tended to emphasise such a revisionist element in her achievement. But if we place "Goblin Market" within the larger context of Rossetti's thoughts on religion and poetry throughout her writing, and if we de-emphasise the dichotomy between Rossetti and her male precursor, alternative patterns of reading begin to emerge. This thesis argues that Rossetti's aim was not only to revise Milton but also to revive him. It develops this point in several ways: first, by introducing the subject and theoretically arguing that literary allusiveness is not necessarily a matter of oedipal or feminist envy only (Chapter One); second, by determining the nature and extent of Rossetti's Miltonic allusions in terms of theme, imagery and language (Chapter Two);and third, by examining their function in terms of argument (Chapters Three andFour). I n an age of increasing religious doubt, Rossetti's poetry provided a subtle challenge not so much to Milton as to the emerging scepticism and aestheticism in Victorian society and its art-world, and not least to the secular tendencies of the second generation of Pre-Raphaelites, including Dante Gabriel Rossetti. Christina Rossetti was ahead of her time (and perhaps ours) in seeing the feminist potential in both John Milton and the Christian message. In the soul's relation to Christ, gender does not matter. What matters is the individual's quest for salvation, a quest in which poetry is a sacramental act, with a transformative, unifying function. Rossetti's poems both depict and constitute such a quest for union with God, on the assumption that God's word offers a pathway that is open to men as well as women.