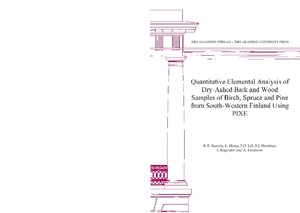 A total of over 200 different samples of bark and wood of Silver birch, Norway spruce and Scots pine were analysed. Samples were taken from several areas in western Finland, some with known sources of atmospheric heavy metal emission (Harjavalta, Ykspihlaja). Also analytical data for pine needles from some sites are reported. The chemical analyses were performed by thick-target particle-induced X-ray emission (PIXE) spectrometry after preconcentration by dry ashing of samples at 550oC. The following elements were quantified in most of the samples: P, S, K, Ca, Mn, Fe, Ni, Cu, Zn, Rb, Sr, Cd, Ba and Pb. The ash percentage and the chemical composition of ashes of different wood materials were also obtained, as dry ashing was used in the analytical procedure. The variations in elemental concentrations in wood and bark of an individual tree, expressed as RSDs, were mostly in the range 10 – 20 %. For several trees of the same species sampled from small areas (< 1 ha), the variations in elemental concentrations were surprisingly high (RSDs 20 – 50 %). In the vicinity of metal plants, effects of strong atmospheric heavy metal pollution (pollution factor above 100) were observed in pine bark. The increase of heavy metal content in wood samples from the same sites was quite small. Elemental concentrations in ashes of bark and wood, from areas with no local source of atmospheric pollution, were relatively uniform.
Based on this observation an alternative way of demonstrating atmospheric pollution of tree bark is discussed.