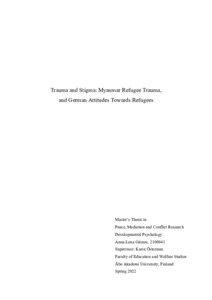 Aim: The aim of the study was to investigate trauma experienced by Myanmar refugees in Germany, and German attitudes towards those refugees.
Method: For the online questionnaire study (N = 266), participants were randomly assigned to one group reading either an emotional, factual, or no text. Questions regarding felt emotions, perceived threat, and refugee encounters were posed. For the interview study (NE = 2; NID = 4), experts gave their insights about trauma of Burmese people, and stigma regarding the term “refugee”. Burmese participants were questioned about the same topics referring to their own experiences.
Results: Having read an emotional text, being highly educated, female, relatively young, or having encountered a (Burmese) refugee led to higher levels of positive feelings and reduced perceived threat. The interviews revealed high levels of trauma among Burmese participants but only due to their experiences in Myanmar, not in Germany.
Conclusions: German attitudes towards Burmese refugees can be altered with intergroup contact and emotional news coverage. The Burmese individuals in Germany suffer PTSD symptoms due to the situation in Myanmar, not because of stigmatization.