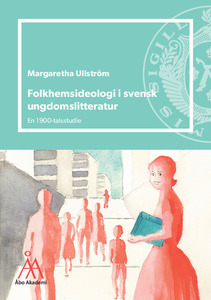 This thesis, ”The ideology of Folkhemmet in Swedish 20th Century Youth Literature”, investigates various manifestations of the Swedish concept of the welfare state Folkhemmet and its ideological conceptions as portrayed in Swedish 20th century youth literature. The thesis is a longitudinal discourse analysis, spanning the whole century. The starting point of the study is based on conceptions linked to the folkhem concept of the welfare state model in Sweden with the aim to deepen knowledge of the ideological dimensions of youth literature and to demonstrate generally how the connection between literature, ideas and politics in this case developed over time. Youth literature is here approached as a discursive practice in a social and political context and read against the backdrop of the historical development of Swedish society in the 20th century.

In four chronologically structured chapters, covering the decades from 1901 till 1999, 70 randomly selected youth literature titles representing all the decades are studied. The selection includes books for boys and girls, as well as books included in the category of youth literature.

The study indicates the presence of a class bound counter discourse to the folkhem and its ideology throughout the 20th century. The notion of the dangerous lower classes is an undercurrent in youth literature during the whole 20th century. In addition, there is the prominent interdiscursivity created about working-class boys, who abuse alcohol and gradually slide into criminality via car thefts. The opposite to this boy is the socially mobile per son, a common character in folkhem related youth literature. Social mobility is a discursive and defining feature of the folkhem in youth literature.

The (re)production of the folkhem and its ideology in 20 century youth literature is thus not simply an uncritical adoption of norms and ideals. This is above all clear regarding the issue of women’s emancipation pursuits. Youth literature provides a strong critical voice emphasising that the road to wo men’s emancipation is through acquiring financial independence via gainful employment. This was advocated in Sweden at a time when the housewife icon was still a folkhem ideal.

The existence of youth literature is important to the social production of ideology and while child and youth literature may serve normative as well as conservative purposes, it may also involve a liberating potential by offering alternative values and inspiring new ways of thinking about the world. This study demonstrates that youth literature is a valuable and relevant discursive practice and also sheds new light on its relation to ideology, power, and oppression.