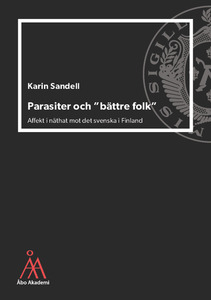 The title Parasites and “better people”: Affect in online hate speech directed at the Swedish in Finland is based on quotes from the material analysed in the thesis. The word “parasites” is used directly about Swedish-speakers in Finland in a couple of posts, and the idea of Swedish-speakers viewing themselves as “better people” is floated throughout the material. Affect theory is the starting point for my understanding and analysis of the material.

The term online hate speech lacks a general scientific definition. I have deliberately chosen to use this emic, non-scientific “inside” term to stay close to my research material, and close to my folkloristic roots. Online hate speech is commonly defined as hostile utterances directed at individuals and/or groups in the form of comments, e-mails, blog posts, and various discussions on the Internet.

The affective tools are the outset for my content analysis. By content analysis, I refer to a qualitative analysis of the material content to grasp what is expressed through the published texts. The affective tools are four different means of expressing and mediating affect through text. Emotive expressions are expressive in character. They are not named emotions but convey affect. Emotional words are words for feelings like “hate” or “love”. Metaphors are figures of speech, and a manner of talking about an entity by experiencing and understanding it via something else. Orthographic practices such as capital letter, punctuation and (mis)spelling usage convey and strengthen a message. The affective tools are essential to my analysis of online hate speech as a genre, since it is through them that hate can be expressed and mediated to the reader of the text.

The genre definition of online hate speech is based on online communication: there is a platform where a message is published and/or can be received, and it comprises an incidence of someone being offended. However, online hate speech is not always expressed through explicit aggressivity and resentment; it might be conveyed in a composed and objective manner. In researching online hate speech as a genre, I see how crude statements about Swedishspeakers are mediated and reiterated in a discussion forum, but there is a wider context.

The mediated texts are not independent opinions, they are continuations of a dream of a monolingual Finnish nation originating from a time long before Finland’s independence from Russia in 1917. The transmitted texts are not contained within the forum but are spread online and into other contexts. Online hate speech leaks into other genres in both public and private domains; it is resounded in the parliament and in private conversations. The digital world is not separate from the analogue “reality”, rather it is a part of the same entirety.

Finland has two national languages, Finnish and Swedish. “The public authorities shall provide for the cultural and societal needs of the Finnishspeaking and Swedish-speaking populations of the country on an equal basis” (The Constitution of Finland 731/1999, 17 §). Swedish-speakers constitute around 5.2 percent of Finland’s population of 5.5 million. Conflicts between the two language groups have flared up with varying intensity since the mid-1800s when the idea of an independent nation began to evolve. Peace between the language groups was made with the end of the war in 1945. However, the debate is still heated at times, especially when it comes to the mandatory teaching of Swedish in Finnish schools.

The material for this thesis consists of about 350 discussion forum posts from Suomi24 published and collected between 2015 and 2017. Suomi24 is one of the most visited web forums for social networking in Finland, with more than two million visitors per month. During my search for online hate speech directed at the Swedish-speaking population, I came across hate speech directed at several other minorities, for example asylum seekers, sexual minorities, and religious minorities. Online hate speech targets many different groups. Please note that I do not imply that the majority of Finnish-speakers partake in hate speech directed at the Swedish-speaking population or any other group. However, research shows that the debate climate overall, both online and offline, has become more aggressive over the years.

Online hate speech is affective, it conveys affect, and works through affect. Affect is a combination of emotions, corporeality, and cultural context, and it is shaped between individuals and their contexts. I view online hate speech as a performance, where the performer calls upon the audience using affective tools. Affective utterances work through performance; they create affective communities and call for action. Affects are performative. Through analysing the web forum material, I show the performativity of online hate speech, how it produces and upholds negative sentiments about the people it targets. Actual societal impact is outside of my scope, but previous research has shown how an online environment where xenophobia and misogynistic opinions are given space can contribute to real acts of violence. What goes on online does not necessarily stay online.

I have paid extra attention to the intersectional categories of language, ethnicity, class and gender. It is through different combinations of these that the Swedish-speaking population is framed as the opposite of Finnishspeakers, and even their enemy. The analysed quotes include examples of Swedish-speakers being called quislings, and their loyalty towards the Finnish nation is questioned. Swedish-speakers are thought of as being upper-class and descendants of old Swedish nobility. Homophobia is a visible theme in online hate speech, and the sexuality and masculinity of Swedish men are up for scrutiny. Swedish-speaking women, on the other hand, are depicted as raging feminists or even as a female grim reaper.

The Swedish language acts as a marker for what is not considered genuinely Finnish. The idea of a monolingual nation as a sign of a strong and independent nation is expressed through the quotes about Swedish-speakers as unwanted citizens. Historical concepts and events are used to justify positions regarding Swedish-speaking minority in Finland. History is produced in online hate speech to give it a sense of authority. The people who are singled out as objects of hatred are dehumanised by being portrayed as animals, likened to diseases, or described as an unnecessary cost. Finally, online hatred expresses a backward-looking value conservatism and presents heteronormativity as the only alternative.