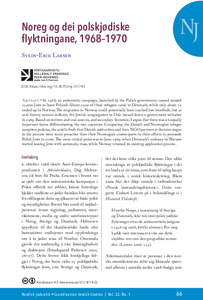 In 1968, an antisemitic campaign, launched by the Polish government, caused around 13,000 Jews to leave Poland. About 2500 of these refugees came to Denmark, while only about 25 ended up in Norway. The migration to Norway could potentially have reached low hundreds, but as oral-history sources indicate, the Jewish congregation in Oslo turned down a government initiative in 1969. Based on written and oral sources, and secondary literature, I argue that there was an equally important factor differentiating the two countries. Comparing the Danish and Norwegian refugee reception policies, the article finds that Danish authorities and their NGO partners at decisive stages in the process were more proactive than their Norwegian counterparts in their efforts to persuade Polish Jews to come. The most critical point was in June 1969, when Denmark’s embassy in Warsaw started issuing Jews with automatic visas, while Norway retained its existing application process.