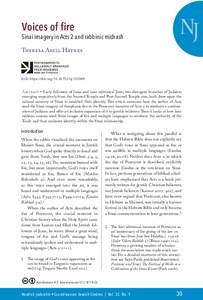 Early followers of Jesus and later rabbinical Jews, two divergent branches of Judaism emerging respectively from the Second Temple and Post-Second Temple eras, both drew upon the cultural memory of Sinai to establish their identity. This article examines how the author of Acts used the Sinai imagery of theophanic fire in the Pentecost narrative of Acts 2 to reinforce a continu­ation of Judaism and offer an inclusive expansion of it to gentile believers. Then it looks at how later rabbinic sources used Sinai images of fire and multiple languages to reinforce the authority of the Torah and their exclusive identity within the Sinai relationship.