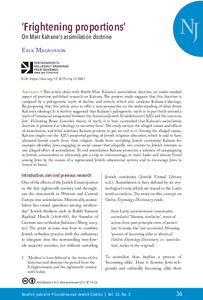 This article deals with Rabbi Meir Kahane’s assimilation doctrine, an under-studied aspect of previous published research on Kahane. The present study suggests that this doctrine is catalysed by a palingenetic myth of decline and rebirth, which also catalyses Kahane’s ideology. By proposing this, this article aims to offer a new perspective on the understanding of what drives Kahane’s ideology. It is further suggested that Kahane’s palingenetic myth is in part built around a myth of ‘intraracial antagonism’ between the American Jewish Establishment (AJE) and the ‘common Jew’. Following Bruce Lincoln’s theory of myth, it is here contended that Kahane’s assimilation doctrine is presented as ‘ideology in narrative form’. The study surveys the alleged causes and effects of assimilation, and what solutions Kahane presents to put an end to it. Among the alleged causes, Kahane singles out the AJE’s purported gutting of Jewish religious education, which is said to have alienated Jewish youth from their religion. Aside from curtailing Jewish continuity, Kahane for example identifies Jews engaging in social causes that allegedly run counter to Jewish interests as one alleged effect of assimilation. To end assimilation Kahane promotes a solution of campaigning in Jewish communities to ultimately put a stop to intermarriage, to instil hadar and ahavat Yisroel among Jews by the means of a regenerated Jewish educational system, and to encourage Jews to ‘return’ to Israel.