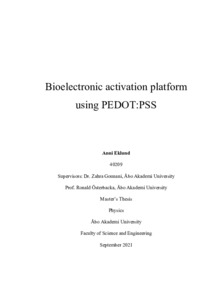 Eklund, Anni
All rights reserved. This publication is copyrighted. You may download, display and print it for Your own personal use. Commercial use is prohibited.
Näytä kaikki kuvailutiedot
Julkaisun pysyvä osoite on
https://urn.fi/URN:NBN:fi-fe2021090745457

Being able to control and understand cell functions at will is a valuable tool in cell biology and opens new possibilities and applications in regenerative medicine and tissue engineering. Developing bioelectronic platforms that allow for spatial and temporal control of both cells and their microenvironment is crucial for scientists to gain a better understanding of cell functions and activation. External control of the conformation of biomolecules allows for the control of their binding affinity to cells, and thus also control of the activation of specific cell functions. Finding new, cheaper, and more biocompatible materials for fabricating bioelectronic activation platforms is therefore of great interest. The conductive polymer PEDOT:PSS possesses several desirable properties, e.g. high conductivity and biocompatibility, making it an exciting and practical material to be used in bioelectronic applications, including for fabricating a bioelectronic activation platform for controlling cell functions.

The purpose of this thesis was to demonstrate the feasibility of using a transparent and conductive PEDOT:PSS thin film as a bioelectronic activation platform for potentially inducing a conformational change in a short peptide sequence with a positive end group.

PEDOT:PSS thin film platforms were fabricated by spin-coating on glass or ITO substrates. The films were made stable and insoluble in organic solutions by the addition of a crosslinker. The film surfaces were functionalized via silanization and the available binding sites for the peptides were quantified using a colorimetric assay. Bio functionalizing the polymer film with the charged peptides was shown not to affect the film conductivity. Underwater contact angle measurements were conducted to demonstrate that a potentially induced conformational change in the charged peptides could be obtained. It was shown that by applying a potential with different polarity over the PEDOT:PSS film with the charged peptides, the surface wettability could be controlled indicating that a conformational change occurred. The measurements conducted in this thesis were not sufficient for conclusive results, and more underwater contact angle measurements are needed to understand how applying a potential over the PEDOT:PSS film affects the wettability of the surface and the conformation of the peptides.