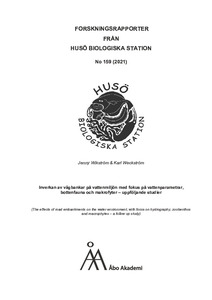 The differences in location and abiotic factors also contributed to the differences in hydrography. At the Husö road embankment, the results from the hydrographic analyses varied greatly from the results at the Sandö and Nåtö road embankments. Naturally, the lowest levels of salinity were observed at Husö, specifically in the most sheltered areas on the eastern side of the embankment. The highest levels of total phosphorous and total nitrogen were also noted in the same area. Regarding zoobenthos, the highest species richness was observed at Husö, meanwhile Sandö had the lowest number of different species. However, Sandö had the highest zoobenthos biomass. Common species were Limecola baltica, Hydrobia spp., Oligochaeta, Hediste diversicolor and Chironomidae-larvae. The vegetation varied greatly between the road embankments, but common species were species of Chara, Stuckenia and Potamogeton as well as Myriophyllum spicatum. The beaches of the Sundö and Husö embankments were dominated by a dense reed-belt (Phragmites australis).

Overall higher values of total phosphorus, total nitrogen and chlorophyll-a was observed at all the stations in 2020 than 2003. A visible change in zoobenthos biomass was observed in this study, in comparison to the latest one. The zoobenthos biomass had dramatically decreased at both the Husö and Nåtö embankment areas but increased at Sandö. More species/taxonomical groups were found 2020 than 2003 and species composition had shifted. Bivalvia was still the dominating taxon overall at all embankments, but at Husö, Insecta had become more common, meanwhile Gastropoda had become more common at Nåtö. At Sandö, a shift from Crustacea dominated to more Gastropoda and Polychaeta dominated zoobenthos had occurred. Noticeably more macrophyte species were found during the survey 2020 than 2003.

To conclude, areas that previously were eutrophicated had further worsened since the last study and overall higher values of nutrients and chlorophyll-a were measured at all the embankments. The zoobenthos species composition and biomass has been altered since the latest study, however, it is hard to determine if it is a result of the road embankments. Vegetation has slightly changed in terms of species; however, it is hard to determine this as well due to the differences in sampling technique.