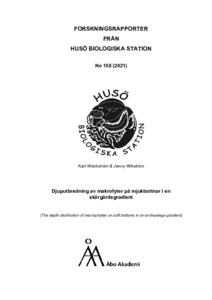 In the summer of 2020, the depth distribution and cover of macrophytes was studied in the northwestern Åland Islands. The aim of the study was to describe how the depth distribution of soft bottom macrophytes changes along an inner to outer archipelago gradient, and which environmental factors influence the differences. Information about the depth distribution was collected with drop-video filming and echo sounding. Hydrographical sampling and light measurements were conducted along the gradient. The hydrographical sampling included temperature, salinity, chlorophyll a, Secchi depth, turbidity, and photic depth. The maximum depth distribution was determined in the field through the livefeed from the drop-video. The video material was analysed to identify species and coverage. The data collected through echo sounding was compiled in maps that illustrated vegetation coverage and depth.

A difference in the depth distribution of macrophytes could be observed along the gradient. Macrophytes grew deepest in the outer archipelago and shallowest in the inner archipelago. The results reflect well the increasing light availability along the gradient. Light availability is probably the main factor influencing the depth penetration but is itself affected by other hydrographical factors.

Perfoliate pondweed (Potamogeton perfoliatus) was the most common species and grew the deepest. There were differences in species composition between the archipelago zones, with the most apparent being eelgrass (Zostera marina) which only grew on the sandy bottoms of the outer archipelago.

Soft bottom macrophytes form an important habitat for marine animals and monitoring of their status is important. The depth distribution of macrophytes can be used in assessing ecological status of an area. Changes in the species composition and how deep they can prosper reflect changes in the environment.