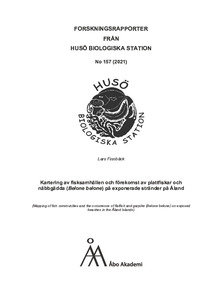 During the summer of 2020, a study was performed to assess the fish communities on exposed and shallow beaches around the Åland Islands, as assigned by the fisheries agency at the Government of Åland. The goals to this project were to examine the occurrence of the declining population of European and Baltic flounder (Platichthys flesus and P. solemdali) and the occurrence of garpike juveniles (Belone belone). A total of 24 beaches around the Åland Islands were surveyed by seining, with a focus on large and sandy beaches. A general mapping of the vegetation was done, and salinity, temperature, pH, and conductivity were measured on all beaches. A total of 22 fish species and 21 species of vegetation were observed during the study. The three-spined stickleback (Gasterosteus aculeatus) and common/sand goby (Pomatoschistus sp.) were the most common and most often the dominating fishes on the beaches. A total of 80 individuals of flounder was found across 9 different beaches, as well as a few young of the year flounder. All occurrences of flounder were on the southwestern coast of Åland. A total of five juveniles of garpike was found on two different beaches on the southwestern side of Åland as well. The findings of juvenile garpike this summer and during the summer of 2019 in the same area indicate that the garpike has suitable areas for reproduction in the Åland waters and that the garpike is reproducing here more regularly than was assumed earlier. Large and sandy beaches are important habitats for both the Baltic flounder and the garpike, and the habitats are threatened by the ongoing eutrophication in the Baltic Sea.