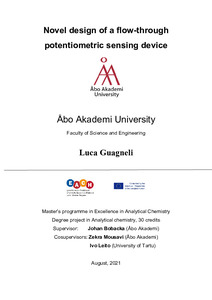 Guagneli, Luca
All rights reserved. This publication is copyrighted. You may download, display and print it for Your own personal use. Commercial use is prohibited.
Näytä kaikki kuvailutiedot
Julkaisun pysyvä osoite on
https://urn.fi/URN:NBN:fi-fe2021062239629

An innovative design of planar electrodes for flow-through potentiometric sensing devices is presented in this thesis. A planar and concentric potassium solid-contact ion-selective electrode (K+-SCISE) has been designed. The K+-SCISE is composed of a valinomycin-based potassium ion-selective membrane (K+-ISM), carbon cloth (CC) as ion-to-electron transducer, and a gold wire as electronic conductor. Three K+-SCISEs have been prepared and characterized. The electrodes showed stabile and reproducible response with short equilibration time. The slopes of the K+-SCISEs, calibrated in the range log⁡[K^+ ] = -1 to -4, were 57.3 ± 0.6 and 56.3 ± 0.4 mV/dec (average ± SD, n = 3) without background electrolyte (BGE) and with 0.1 M NaCl as BGE, respectively. The slopes of three electrodes during five consecutive days were between 56.2 and 59.6 mV/dec in the range log⁡[K+ ] = -1 to -4, with 0.1 M NaCl as BGE. The water layer test showed that the ion-selective membrane/carbon cloth interface is not subject to the formation of a water layer. The selectivity coefficients log⁡ K(i,j) for j = Ca(II), Li(I), Mg(II), Na(I) were -4.29 ± 0.14, -3.21 ± 0.09, -4.68 ± 0.05, and -3.34 ± 0.08 (average ± SD, n = 3), respectively. The electrochemical impedance spectroscopy (EIS) study showed that the resistance R of the membrane depends on its width and thickness. The resistance was in the order of 45-275 MΩ for several electrodes, with different geometries. Three different approaches of innovative planar solid-state reference electrodes (SS-REs) have been explored. Three SS-REs based on tetrabutylammonium tetrabutylborate (TBA-TBB) were tested. The reproducibility of the potential was not satisfactory. A commercial chloride ion-selective electrode (Cl--ISE) was calibrated versus the novel reference electrodes. The slopes of three calibration plots were -63.1, -61.8, and -58.5 mV/dec in the range log⁡[Cl^- ] = -1 to -4. It was not possible to calibrate the novel K+-SCISE versus the SS-RE based on TBA-TBB, due to the loss of performances of the K+-SCISE when in close contact with the reference electrode. Two SS-REs based on silver/silver chloride (Ag/AgCl) approach were designed, one containing a polyvinyl acetate/potassium chloride (PVAc/KCl) composite membrane and the other containing a polyvinyl butyral/sodium chloride (PVB/NaCl) membrane. The layer of the PVAc/KCl composite membrane was too thick and irregular, and it did not meet the requirements of the sensing device. The PVB/NaCl membrane was too hard, and this complicated the cutting process. The two reference membranes did not ensure the isolation between the sensor and the analyte solution.