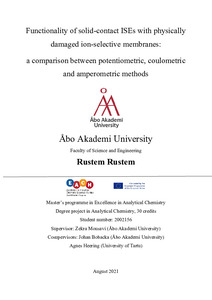 Rustem, Rustem
All rights reserved. This publication is copyrighted. You may download, display and print it for Your own personal use. Commercial use is prohibited.
Näytä kaikki kuvailutiedot
Julkaisun pysyvä osoite on
https://urn.fi/URN:NBN:fi-fe2021070641162

In this thesis, a novel ion-to-electron signal transduction method was applied for checking the functionality of chloride and potassium solid-contact ISEs with physically damaged ion-selective membranes (ISMs). The potentiometric response was compared with amperometric and coulometric methods before and after damaging the ISMs. Poly(3,4-ethylenedioxythiophene) (PEDOT) were used as solid-contact doped with chloride anions (Cl−), i.e., PEDOT(Cl) and PEDOT doped with poly(styrene sulfonate) (PSS), i.e., PEDOT(PSS). Sequential addition/dilution in concentration was recorded by using potentiometric, amperometric and coulometric signal transduction methods.

Potentiometric measurements carried out before and after damaging the ISM demonstrated the functionality of chloride ISEs, i.e., the potentiometric calibration curve showed acceptable slopes before and after damaging of ISMs. The coulometric measurement results showed a very similar response for every increase/decrease in concentration, showing stable accumulation of charge but with steady perceptible drift in the response. This drift was also noticed in potentiometry. The amperometric results depicted a significant increase in baseline noise, after the ISM had been damaged, thereby clearly proving that chloride ISEs are not functioning properly.

In the case of potassium SC-ISEs, all (potentiometric, coulometric and amperometric) measurements with and without BGE after damaging the ISM demonstrated inadequate and not comprehensible responses, proving that the ISEs were not functioning after damaging the ISM. However, some response was still observed for every stepwise addition in concentration when measured without any background electrolyte (BGE). The non-functionality was also proven by potentiometric calibration curves clearly showing non-Nernstian responses after electrodes had been damaged both with/without BGE. Based on the above results it can be concluded that the amperometric method is a reliable and suitable method for examining the SC-ISEs for their functionality.