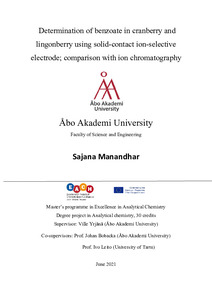 The purpose of this thesis was to develop the solid-contact ion-selective electrodes and to characterize them as benzoate-selective electrodes. The developed electrodes were then applied for the determination of benzoate content in cranberry and lingonberry. The monomer 3,4-ethylenedioxythiophene (EDOT) was polymerized galvanostatically in the presence of chloride (Cl-) to form a solid contact made of poly(3,4-ethylenedioxythiophene) (PEDOT) doped with chloride over the glassy carbon (GC) electrodes. An acyclic derivative of 1,3-bis(carbazolyl)urea was used as an ionophore. The PEDOT:Cl- films on the GC electrodes were coated with either a control membrane or a benzoate-selective membrane by drop-casting a membrane cocktail. The electrodes were calibrated in sodium benzoate solution with and without 0.01 M phosphate buffer. The performance of the fresh electrodes was compared with that of the two-month-old electrodes. The slope of the electrodes changed from Nernstian to near-Nernstian as they aged by two months. The linearity range remained the same with minimal degradation in the limit of detection (LOD). The influence of phosphate on the electrode performance was also studied, which showed significant degradation of the LOD of the benzoate-selective electrodes. The selectivity of the electrodes over different anions was evaluated. The benzoate content in berries was determined potentiometrically by using the standard addition method for quantification. Similarly, the ion chromatography (IC) method was also used for the determination of benzoate. The amount of benzoate found potentiometrically was slightly higher than that determined by IC. The selectivity of the electrodes towards other anions besides benzoate might have resulted in higher quantification by the electrodes. However, the amount determined by both methods was comparable, suggesting the practical applicability of the developed electrodes for benzoate determination.