Development of a novel artificial nose with conductive polymers of 3,4-ethylenedioxythiophene and its functionalised derivatives 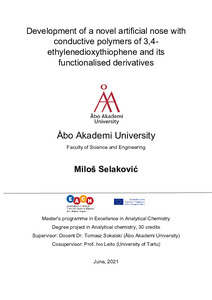 Selakovic, Milos
All rights reserved. This publication is copyrighted. You may download, display and print it for Your own personal use. Commercial use is prohibited.
Näytä kaikki kuvailutiedot
Julkaisun pysyvä osoite on
https://urn.fi/URN:NBN:fi-fe2021062039003

Artificial noses are analytical instruments inspired by the human olfactory system and have been applied for qualitative analysis in many industrial fields, agriculture, forestry, environmental monitoring as well as medical diagnostics. This methodology intends to differentiate volatile organic compounds and their mixtures based on non-selective chemical sensors’ responses and suitable data processing algorithms. In the comparison to the common trial-and-error approach in the synthesis of sensor materials, in this work, it was attempted to gain a better understanding of signal formation mechanisms in gas sensors and to build a reliable platform for testing selectivity of sensor materials. The heart of the in-house built artificial nose was the gas chamber with split flows whose construction was based on geometry optimisation experiments. The gas chamber contained a filter paper substrate with casted sensor materials, aluminium and Teflon® blocks and connecting elements. As the sensor materials, composites of poly(3,4-ethylene-dioxythiophene) and seven of its derivates (chloromethyl-, acetoxymethyl-, azidomethyl-, imidazoliummethyl-, aminomethyl-, hydroxymethyl- and L-phenylalanine-derivate) with poly(vinyl chloride) (7:3, m:m) were utilised. Due to the poor repeatability of the casting process and differences of polymers’ sheet resistances, a problem that a broad range of sensor resistances cannot be measured in parallel was encountered. However, multilayer drop-casting, reduction of sensor dimensions, connecting of a constant resistor in parallel or series to the sensor and utilising of copolymers of 3,4-ethylenedioxythiophene (EDOT) and functionalised EDOTs helped in achieving the simultaneous measurement of all sensors’ resistances. It was found to be hard to predict the sensors' responses to different solvents. However, several factors were identified to be important in signal formation: hydrogen bond formation between an analyte molecule and the sensor material, the polarity of the analyte and the size of the analyte molecules. The efficiency of the instrument was demonstrated in the analysis of four organic solvents (methanol, ethanol, dichloromethane, and chloroform). It was found that a simple classification model based on the distances between an object and cluster centres can provide 79% accuracy in the case of the four solvents or 100% accuracy in the classification problem of methanol and ethanol. The latter can be a promising result for quality control in the spirits industry.