Woke-washing or altruism? : Understanding the phenomenon of brand activism by studying the media effects and audience responses to the practice 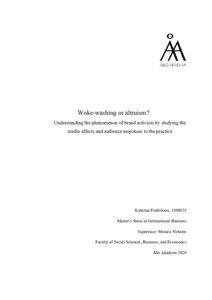 Fredrikson, Katarina
All rights reserved. This publication is copyrighted. You may download, display and print it for Your own personal use. Commercial use is prohibited.
Näytä kaikki kuvailutiedot
Julkaisun pysyvä osoite on
https://urn.fi/URN:NBN:fi-fe2021062840330

At the latest in the summer of 2020 the world became aware of an emerging marketing tactic and phenomenon known as brand activism when companies rushed to release statements for the need of solidarity and change in the wake of mass demonstrations against racism and discrimination across the globe, that gained significant media- and social media attention at the time. Engaging in brand activism is risky, due to the biased nature of the practice – it may affect firm value and the brand’s reputation either negatively or positively but predicting the effect of brand activism in advance is difficult. Authentic brand activism requires that the brand values, purpose, communication, and practices are subsequent.

This study inspects the framing of the phenomenon in the news media in a Finnish context. Additionally, responses by the audience were studied in order to reveal the attitudes towards the practice. A framework was developed to understand the agenda-setting effect of the media and the interpretation of the ‘reality’ and ‘media reality’ by the public. The empirical case study used secondary data consisting of 44 news articles covering brand activism that were published in the Finnish major daily newspaper Helsingin Sanomat (HS) during 2020, as well as a total of 562 attached reader comments posted on the online platform of the newspaper, of which 423 were analysed. The research method was a qualitative content analysis that was partly conducted with the help of computer software program NVivo. The tone of voice was identified in both articles and the responses, and a frame analysis was conducted for the news articles covering brand activism. In addition, the articles and responses were analysed by themes.

The main findings of the empirical study indicate that the Finnish media frames brand activism by emphasising the companies’ or society’s responsibilities. Economic consequences are also frequently highlighted, and the Black Lives Matter (BLM)-movement was declared an influential event to the research topic. The newspaper used a neutral tone when writing about the topic, yet the responses to the news coverage on brand activism were mainly negative. The readers of the studied newspaper were clearly sceptical towards the practice and often remarked on brand activism being used as a mere marketing trick while the newspaper underlined company values as a motivator. It is concluded that brands should proceed with care when addressing polarising societal issues.