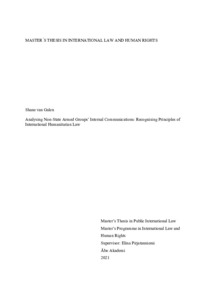 van Galen, Shane
All rights reserved. This publication is copyrighted. You may download, display and print it for Your own personal use. Commercial use is prohibited.
Näytä kaikki kuvailutiedot
Julkaisun pysyvä osoite on
http://urn.fi/URN:NBN:fi-fe2021070140821

In order to increase the effectiveness of such activities, this thesis seeks to contribute to the operationalisation of education efforts by recognising the existence of a core set of principles that can be discerned from non-state armed groups’ internal communications. By researching these often easily neglected soft law documents, namely codes of conduct, internal manuals, oaths, international commitments and so on, and comparing them and analysing them in light of the laws applicable to non-international armed conflict, namely Common Article 3 of the Geneva Conventions, customary international humanitarian law, and Additional Protocol II to the Geneva Conventions, a body of ‘customary non-state armed group law’ has been recognised.