EU Countering Terrorism through Asylum Law : Serious Reasons to Exclude Members of Terrorist Organisations from Refugee Status Due to Their Participation in Acts Contrary to the Purposes and Principles of the UN 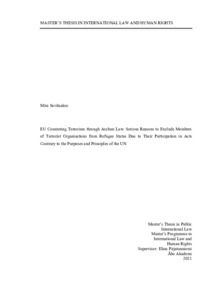 Savilaakso, Mira
All rights reserved. This publication is copyrighted. You may download, display and print it for Your own personal use. Commercial use is prohibited.
Näytä kaikki kuvailutiedot
Julkaisun pysyvä osoite on
http://urn.fi/URN:NBN:fi-fe2021062840262

Firstly, the terrorist nature and the acts and activity of terrorist groups are discussed. The establishment of the terrorist nature of an organisation in the exclusion context is affected by the UN and EU lists of terrorist groups. Additionally, different terrorism related acts and activities are listed in the EU Terrorism Directive. These actions may be considered as acts contrary to the purposes and principles of the UN in the meaning of the UNSC resolutions. However, that does not necessarily mean that such actions also conform to the acts regulated in the context of the exclusion ground (c). The application of the exclusion ground (c) requires that an action fulfils a certain gravity threshold. The threshold may be crossed at least then when the action contains indiscriminate violence or violence against civilians, or then when the action has serious implications on international peace and security. Not all terrorism related actions criminalised in the Terrorism Directive conform to these gravity requirements.