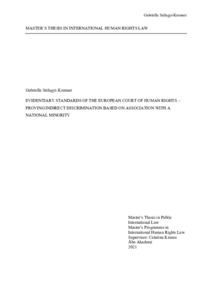 Szilagyi-Krenner, Gabriella
All rights reserved. This publication is copyrighted. You may download, display and print it for Your own personal use. Commercial use is prohibited.
Näytä kaikki kuvailutiedot
Julkaisun pysyvä osoite on
http://urn.fi/URN:NBN:fi-fe2021062840318

This study examines the evidentiary standards of the European Court of Human Rights in cases concerning indirect discrimination based on association with a national minority. Evidentiary matters play a significant role in human rights law adjudication, however, neither the European Convention on Human Rights, nor the Rules of the Court contains rules regarding the standard of proof and the evaluation of evidence. Therefore, the Court created its own operational method and enjoys a wide-range freedom in assessing a case and determining if a violation of a Convention right occurred.

As the European Court of Human Rights articulated, it considers any applicable international law while interpreting the Convention, and it regularly refers to various regional instruments. This thesis analyses the European framework for non-discrimination in order to establish the elements of indirect discrimination. With the aid of the elements of indirect discrimination, the thesis discusses the allocation of the burden of proof and the standard of proof as applied by the Court.

The standard of proof of the Court is “beyond reasonable doubt”, as it has been articulated in several judgments by the Court. However, the Court also stated that it applies this standard in adaptively, and the standard is not used with the same rigorousness as it is used in criminal proceedings.

This study concludes that the Court needs to pronounce a lower standard as a principle in cases of indirect discrimination, to avoid interpretational discrepancies and conflicting judgments based on similar facts, as it happened in the cases mentioned. A clearly defined standard of proof would undoubtedly enhance protection of the rights of members of vulnerable minorities. Simultaneously, it would ensure consistent decisions, thus encouraging the States to comply with their obligations under the Convention and correct the substantive or procedural deficiencies.