Indigenous Self-Determination and the Human-Rights Based Approach to Sustainable Development : Potentials and Limitations 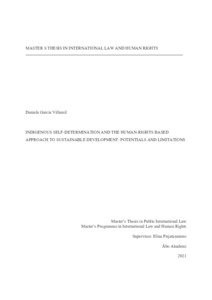 García Villamil, Daniela
All rights reserved. This publication is copyrighted. You may download, display and print it for Your own personal use. Commercial use is prohibited.
Näytä kaikki kuvailutiedot
Julkaisun pysyvä osoite on
http://urn.fi/URN:NBN:fi-fe2021070140789

In a global scenario of growing environmental pressure and escalating resource conflicts, Indigenous peoples have gained increased visibility. First, the recognition of their potential contributions to environmental protection, climate adaptation and resource management has positioned Indigenous peoples as fundamental agents in the pursuit of sustainability. Second, most Indigenous populations face extreme forms structural inequality, accounting for almost 19% of the extreme poor. In this regard, sustainable development appears as a shared approach to development, promising to respect their self-determined development, while ensuring the amelioration of their living conditions and well-being. Third, Indigenous peoples often inhabit territories rich in resources considered ‘strategic’ both for natural resource exploitation and conservation. Therefore, conflicts over investment and development projects in their territories are constant threats. Recent years have seen an alarming increase in the abuse of their rights, to the extent that Indigenous peoples often describe the affectations as genocide or ethnocide.

In this context, Indigenous peoples have continued to assert their right to self-determination, as foundational right for the guarantee of all their fundamental freedoms and human rights, including, in the pursuit of sustainable futures. Therefore, the following thesis seeks to explore the potentials and limitations of a human-rights based approach to sustainable development in the realization of Indigenous self-determination. To achieve the latter, it examines the scope, extent, and limitations of the right of Indigenous peoples to self-determination, and some of the international legal implications emerging from the notion of sustainable development vis-a-vis Indigenous peoples. This is done through the combination of a historical approach to international law and some elements of the doctrinal method. It concludes that there are significant challenges for the realization of Indigenous self-determination within the emerging regulations on sustainable development, both arising from international and human rights law’s own theoretical limitations, as well as from the lack of engagement with other branches of law.