The Use of Anglicisms in German, Swedish and Finnish Newspaper Advertising 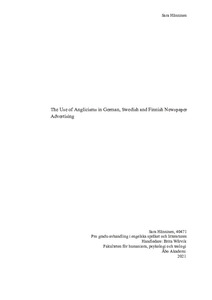 Hänninen, Sara
All rights reserved. This publication is copyrighted. You may download, display and print it for Your own personal use. Commercial use is prohibited.
Näytä kaikki kuvailutiedot
Julkaisun pysyvä osoite on
https://urn.fi/URN:NBN:fi-fe2021052531651

The English language, today’s global lingua franca, is constantly gaining ground worldwide, which also means that the influence of English on other languages is continually expanding. English is the most widely spoken language in human history and the language of international communication.

This crosslinguistic study investigates how English elements appear in the advertising discourse of three European languages: German, Swedish and Finnish. The situation with the lexical input of English into European languages is continually changing and this means that each study on anglicisms provides a ‘snapshot’ of the situation at that particular moment. There is thus a constant need for new studies of this language contact phenomenon. The material of the present study consists of three issues of high circulation broadsheet newspapers: the German newspaper Die Welt, Swedish Dagens Nyheter and Finnish Helsingin Sanomat. The material was collected on June 1, 2019 and thus gives an overview of the anglicism situation in mid-2019.

The research questions of the study are the following: 1) How are anglicisms used in German, Swedish and Finnish print newspaper advertisements? 2) What are the differences and similarities in the use of anglicisms in the three languages?

The data of the study suggest that the use of English in advertising discourse is common in all the three languages as the majority of the advertisements in each newspaper issue contain anglicisms: 60 % of the German, 70 % of the Swedish and 55 % of the Finnish advertisements contain English elements. The findings also suggest that there are commonalities in the use of English lexical elements between German, Swedish and Finnish advertising language. Common uses of anglicisms in the three European languages are, for instance, product and company names, technical terms and slogans. Common motivations for the use of English in the three languages might be the modernity and internationalism that English brings with it. Additionally, there could be a lack of equivalent words in other languages to recently introduced English terms, i.e. lexical gaps. These anglicisms might be, for instance, technical innovations with an international English name that do not have equivalents in other languages. Advertising is thus an important factor in language change as it functions as the mediator of new, often English, terms, and enables them to spread globally.